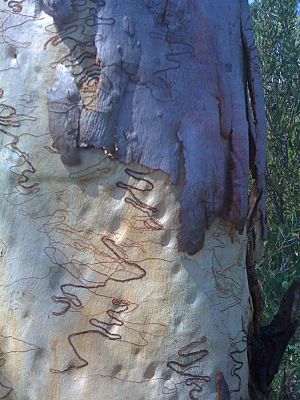 The reserve is bounded by Caravan Head Road, Cook Road and private property located in the northern part of the suburb of Oyster Bay. It consists of two parcels of land, Lot 9 Deposited Plan 203088 owned by the State of NSW and Lot 31 DP 203088 owned by Sutherland Shire Council. The land is zoned E2 - Environmental Conservation under Sutherland Shire Local Environmental Plan 2015.

It contains a diverse array of native ridgetop native vegetation due to the fact the land was put aside for a proposed school that was never built eventually its ownership was transferred and a development proposal was put forward in the 1990s after local uproar and political support the land was bought by the state government and it was turned into a bushland reserve. During the reserves early history it was severely damaged when the centre of the site was gutted of vegetation and bike tracks cut the remaining vegetation into smaller fragments. After over a decade of regeneration efforts by the local Bushcare Group of volunteer members the site has been nearly restored to its former glory even though it will always need constant attention into the future.

On the eastern side of the reserve a dense callitris woodland exists Callitris rhomboidea (Port Jackson pine) under which grow extensive native pasture and an open shrubbery. The majority of the site consists of semi-disturbed woodland dominated by Corymbia gummifera (red bloodwoods); Angophora costata (Sydney rosegum) and Eucalyptus haemastoma (scribbly gums).

The majority of the site is on a very slight slope with few exposed rock and deep sandy soils except for the northern edge where massive boulders of Sydney sandstone protrude from a more steep hillside which has acted to preserve a more diverse groundcover. The southern edge and the center of the site have all been re-vegetated by Bushcare to a near-natural state with a variety of species and other species from the surrounding bushland are re-colonising these areas. A total of nearly 150 species of native flora have been recorded in the reserve. 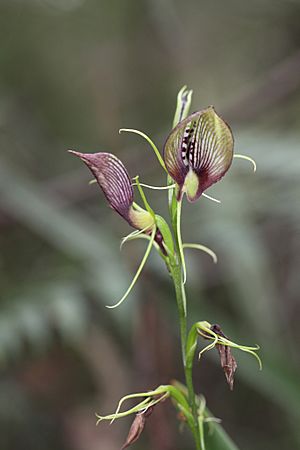 Several species of tiny orchids grow in this reserve, their leaves are so tiny as to be mistaken for a piece of grass when not in flower and often die back to a tiny little bulb in hot weather. Orchid species recorded include: Theylmitra pauciflora; Cryptostylis erecta; Calochilus paludosus and Pterostylis sp. 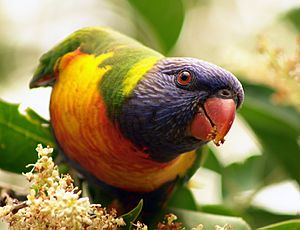 Native birds that frequent or inhabit the reserve include the: Pied currawong; Australian magpie; Noisy miner; Laughing kookaburra; Pied butcherbird; Trichoglossus moluccanus (Rainbow lorikeet); Yellow-tailed black cockatoo; Sulphur-crested cockatoo; Magpie-lark; Koel; Tawny frogmouth; and Australian raven. Birds that once did use the site but are now recently extinct from this locality include the Superb fairy wren; Spotted pardalote and Silver-eye.

All content from Kiddle encyclopedia articles (including the article images and facts) can be freely used under Attribution-ShareAlike license, unless stated otherwise. Cite this article:
Caravan Head Bushland Reserve Facts for Kids. Kiddle Encyclopedia.