Dianella caerulea, commonly known as the blue flax-lily, blueberry lily, or paroo lily, is a perennial herb of the family Asphodelaceae, subfamily Hemerocallidoideae, found across the eastern states of Australia and Tasmania. It is a herbaceous strappy perennial plant to a metre high, with dark green blade-like leaves to 70 cm long. Blue flowers in spring and summer are followed by indigo-coloured berries. It adapts readily to cultivation and is commonly seen in Australian gardens and amenities plantings.

It was first described by English taxonomist John Sims in Curtis's Botanical Magazine in 1802. Its specific name is the Latin adjective caerulea "blue". The genus name is derived from the Roman goddess Diana, with a diminutive suffix -ella.

Dianella caerulea is highly variable species, with many forms found throughout eastern Australia. Six varieties are known from the Sydney district alone.

The species is described as having seven varieties, having been revised by Queensland botanist Rod Henderson in 1987 for the Flora of Australia: 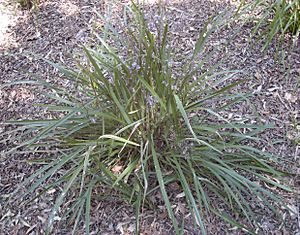 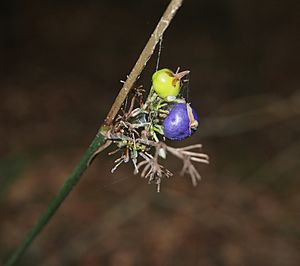 Dianella caerulea is a strappy herbaceous fruit bearing plant to about 1 metre (3 ft) high, with a thick spreading rhizome under the ground. The bright green leaves have straight or toothed margins, and may reach 75 cm (30 in) in length and 0.3-2.5 cm wide. The small (1-1.6 cm diameter) flowers bloom in spring and summer (August to January); the perianth is pale to a dark blue, or green-blue, and the anthers at the centre are yellowy brown. These are followed by small roughly spherical indigo-coloured berries which range from about 0.7 to 1.2 cm (0.3-0.5 in) in diameter. These fruit are edible.

The plant is distributed through a range in Victoria, New South Wales, Tasmania, and Queensland. It occurs in a wide range of habitats, from coastal heathland and even sand dunes. 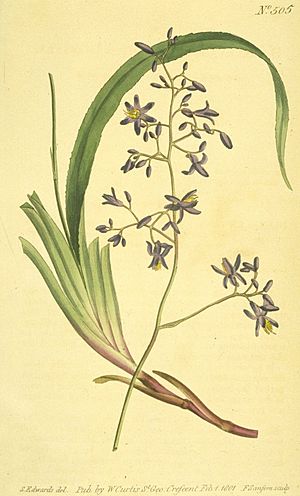 Image in Curtis' The Botanical Magazine

Believed to have been first propagated in England in 1783, Dianella caerulea is commonly cultivated in gardens, and is sometimes seen as a low-hedging plant in public spaces and amenities plantings. It is very hardy and long-lived, and suitable for rockeries. It is tolerant of poor drainage and responds well to extra moisture. Plants attract fruit-eating birds and butterflies in garden settings. The smaller denser forms in particular have potential for small gardens.

Dianella caerulea is a very hardy (snow and frost hardy) and long-lived plant once established. It can tolerate damp conditions but prefers moist well drained soil. It adapts readily to cultivation.

All content from Kiddle encyclopedia articles (including the article images and facts) can be freely used under Attribution-ShareAlike license, unless stated otherwise. Cite this article:
Dianella caerulea Facts for Kids. Kiddle Encyclopedia.