Hardenbergia violacea is a species of flowering plant in the pea family Fabaceae, native to Australia from Queensland to Tasmania. It is known in Australia by the common names false sarsaparilla, purple coral pea, happy wanderer, native lilac and waraburra (which comes from the Kattang language). Elsewhere it is also called vine lilac or lilac vine. 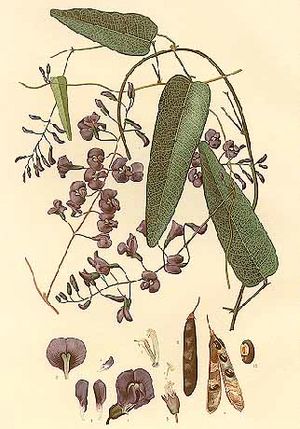 It is a vigorous evergreen climber growing to 6 m (20 ft) or more, sometimes growing as a subshrub. It has typical pea-like flowers which are usually violet but can be white, pink or other colours. The leaves are dark green, "hard" and leathery, with prominent venation. 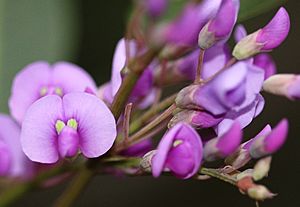 H. violacea regrows from its roots after fire. The roots were experimented with by early European settlers as a substitute for sarsaparilla.

H. violacea is a widespread species found in many habitats. It is also widely grown as a garden plant, with many cultivars now available. It is hardy in mild and coastal areas of the UK where temperatures do not fall below −5 °C (23 °F), but it does require a sheltered, south or west facing situation. Alternatively it may be grown indoors with full daylight, for instance in an unheated conservatory or greenhouse. It has been given the Royal Horticultural Society's Award of Garden Merit.

It can be propagated from seed after pre-treatment (e.g. scarification), when around 21 °C. The seeds are naturally dispersed by ants.

All content from Kiddle encyclopedia articles (including the article images and facts) can be freely used under Attribution-ShareAlike license, unless stated otherwise. Cite this article:
Hardenbergia violacea Facts for Kids. Kiddle Encyclopedia.