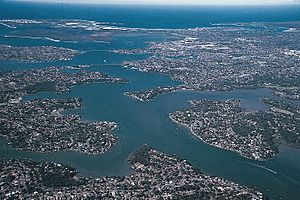 Oatley Bay is a bay located in the Georges River Council, surrounded by the suburbs of Oatley, Hurstville Grove and Connells Point. The bay is part of the Georges River waterway. It is popular for boating, fishing, picnicking and bush walking, and is surrounded by waterfront properties. It also has the largest number of plants and animals in the Municipality of Kogarah protected in its reserves/parks, which include: Poulton Park, Redin Place Reserve, Oatley Point Reserve, Oatley Pleasure Grounds and Moore Reserve.

Two waterways flow either side of Hurstville Grove into Oatley Bay. One is the Municipality of Kogarah's last remaining natural creek which flows through Poulton Park; the other is channeled underground through Moore Reserve.

Oatley Bay also has one of the largest areas of mangroves in the Georges River, found on the eastern shore at Poulton Park.

The bay has a shallow depth, averaging about 1.5 metres, and is the end point for all run-off from the approximately 468-504 hectare Oatley Bay catchment, which has mild to steep slopes, averaging about 3.3%. 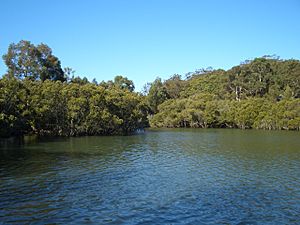 One way of accessing Oatley Bay by boat is through Oatley Bay Boat Ramp. The boat ramp is in good quality and has 3 lanes- with the water depth at the ramp able to handle most boats. On one side of the ramp there is a small beach and on the other side there is a jetty. There are also toilets near the top of the ramp site and parking facilities for over 35 trailers.

All content from Kiddle encyclopedia articles (including the article images and facts) can be freely used under Attribution-ShareAlike license, unless stated otherwise. Cite this article:
Oatley Bay Facts for Kids. Kiddle Encyclopedia.