Kids Encyclopedia Facts
This page is about the former railway bridge converted to pedestrian and cycle usage. For the current rail bridge, see Como railway bridge. 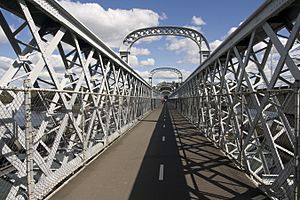 Oatley was named after a man who never lived in the area. James Oatley (1770–1839) a convict clock maker arrived in the colony on 27 January 1815 to serve a life sentence. The clock at Hyde Park Barracks, built between 1817–19, included a clock made by Oatley. When he was pardoned, he received several land grants. One, granted in 1833, was 120 hectares (300 acres) near the George's River. He called the property Needwood Forest, after woodlands in his native Warwickshire in England. Oatley never built on the land, but lived on a farm called Snugsborough near Beverly Hills. It stood in a 71-hectare (175-acre) grant received in 1831. He died in 1839, and was buried at Snugsborough, where his grave was found in 1921.

Needwood Forest passed to Frederick, his third son, who sold it to Charles Cecil Griffiths in 1881. The property extended from Gungah Bay on the suburb's western edge, to the later Boundary and Hurstville Roads. When the Hurstville to Sutherland railway line passed through Oatley's old property in the 1880s, the station, opened in 1886, took his name, as did Oatley Bay and Oatley Park, a favourite picnic spot for local residents.

The Old Como railway bridge was completed in 1885 as a part of the original Illawarra railway line infrastructure. It is a very fine example of a single track steel lattice girder bridge of the 1870s and 1880s. Como is the longest single track steel lattice girder bridge in NSW and the only such bridge within 250 kilometres (160 mi) of Sydney. It was a notorious bottleneck within five years of its completion when the single track on either side of the bridge was increased to a double track. The double tracks converged to a single "gauntlet track" on the bridge, which enabled trains to cross in either direction without chain points and with a relative degree of safety. It was one of only a few installations of this type in NSW.

Between 1935 and 1942, the Metropolitan Water Sewerage and Drainage Board built a new 1,220-millimetre (48 in) diameter pipeline to pump water from the recently completed Woronora Dam to the Board's reservoirs at Penshurst. The pipeline was carried over the Georges River on the Como railway bridge, supported on new steel outriggers cantilevered from the main girders. To maintain an evenly balanced load, the 1,220-millimetre (48 in) pipeline was split into two 600-millimetre (24 in) diameter mains, one supported on each side of the bridge.

The old Como railway bridge was finally superseded in 1972 by a new double track reinforced concrete bridge, built alongside the existing bridge. Responsibility for the old bridge was transferred to the Metropolitan Water Sewerage and Drainage Board, now Sydney Water. Sutherland and Georges River Councils, the local authorities on either side of the river, shared the cost of converting the railway track to an extensively used cycleway and footpath, which opened in 1985, 100 years after the construction of the bridge.

In the late 1990s, Sydney Water undertook upgrading works to the pipeline and maintenance gantries to repair leaks and comply with current OH & S requirements.

An iron lattice girder bridge. Formerly a rail bridge. Sydney Water has had a sewerage pipeline running across the bridge for many years. The railway infrastructure has been removed from the deck and the bridge deck is used as a pedestrian bridge over the Georges River.

Rail infrastructure removed from the bridge deck and replaced with bitumen footway.

As of November 2018, the Como Rail bridge is significant as the longest single track lattice girder bridge in New South Wales and is a rare example of this type. Historically, the bridge contributed to the opening up of the southern suburbs of Sydney in the 1880s. While the rail infrastructure has largely been removed from the bridge, it continues to serve an important function, supporting the Woronora to Penshurst Water Supply Pipeline, part of Sydney's fifth water supply system. It also provides an important pedestrian link across the Georges River.

The Old Como railway bridge was listed on the New South Wales State Heritage Register on 15 November 2002 having satisfied the following criteria.

The Old Como railway bridge is one of Whitton's 12 original lattice wrought iron girder bridges and is of high significance and visibility in the surrounding area. It is a major structure in the area and indicates clearly the level of design and technology involved in early railway construction to cross a major river.

The bridge is the older of two important man-made elements in a scenic estuarine landscape, contrasting with the strong natural quality of the environs. The simple, rugged quality of the engineering contrasts with the Australian bush, cliff and shore settings.

The bridge was a part of a major transport link between the South Coast and Sydney, encouraging development in the towns and suburbs which emerged along the railway line. The presence of the railway line encouraged Sydney day-trippers to use the Como boatsheds, baths, fishing locations and the adjacent National Park. The bridge continues in service as an important pedestrian and bicycle link across the Georges River.

The bridge is the only rail bridge of this style within 250 kilometres (160 mi) of Sydney and was one of a group of twelve constructed in the 1880s. The survival status of the remaining 11 bridges has not been investigated.

All content from Kiddle encyclopedia articles (including the article images and facts) can be freely used under Attribution-ShareAlike license, unless stated otherwise. Cite this article:
Old Como railway bridge Facts for Kids. Kiddle Encyclopedia.