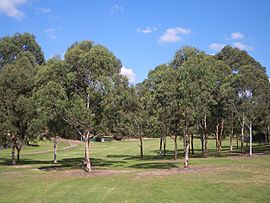 Peakhurst is a separate suburb to the north. Peakhurst Heights is bordered by Boggywell Creek and Lime Kiln Bay, on the Georges River. The shores of Lime Kiln Bay once had Aboriginal middens that were used by shell-gatherers.

Peakhurst Heights is a mainly residential area. Gannons Park is a large recreation area in the north west corner and Hurstville Golf Course sits on the eastern border.

Peakhurst was named after landholder John Robert Peake. The area was originally part of a land grant to Captain John Townson. John Robert Peake bought 10 acres (40,000 m2) of land from William Hebblewhite in 1838. Peake donated land for the first Methodist church built in 1856. School Inspector Huffer suggested that Peake's name be used when the public school was founded in 1871 and it was later adopted by the suburb. The post office opened in 1885.

Peakhurst Heights was a locality in the suburb of Peakhurst, until it was recognised as a separate suburb in 1995.

Each Christmas Eve the residents of Peakhurst Heights congregate on the streets. Houses are adorned with Christmas lights and decorations and the streets are lined with candles as inspired by the Spanish tradition of Noche Buena. The last Friday of every month at the courtyard of Our Lady of Fatima Catholic Church Peakhurst there is a Farmers Market Event where a various amount of different foods are together for everyone to enjoy.

All content from Kiddle encyclopedia articles (including the article images and facts) can be freely used under Attribution-ShareAlike license, unless stated otherwise. Cite this article:
Peakhurst Heights, New South Wales Facts for Kids. Kiddle Encyclopedia.