City of Bankstown facts for kids

The City of Bankstown was a local government area in the south-west region of Sydney, Australia, centred on the suburb of Bankstown.

In 2006, the NSW government released a planning strategy for Metropolitan Sydney, known as the City of Cities plan for Sydney. The plan identified Bankstown as a 'major centre' for the south west Sydney region. Bankstown Airport was also identified as a 'specialist centre' and the Hume Highway as part of a potential transport corridor. Under the most recent Draft Metropolitan Strategy for Sydney released in 2013, the NSW Government has reaffirmed Bankstown as a major centre, and Bankstown Airport as a specialised centre.

The last Mayor of the City of Bankstown Council was Clr Khal Asfour, a member of the Labor Party.

A 2015 review of local government boundaries by the NSW Government Independent Pricing and Regulatory Tribunal recommended that the City of Bankstown merge with the City of Canterbury to form a new council with an area of 110 square kilometres (42 sq mi) and support a population of approximately 351,000. On 12 May 2016, the NSW Government announced that Bankstown would merge with neighbour City of Canterbury to be known as Canterbury-Bankstown Council.

Suburbs of the City of Bankstown

Suburbs and localities in the former local government area were: 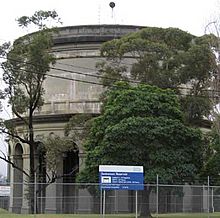 The water tower, known as Bankstown Reservoir, is a heritage item managed by Sydney Water. In 1826, bush rangers were hanged on the site where the water tower now stands.

District of Bankstown was named by Governor Hunter in 1797 in honour of botanist Sir Joseph Banks, who travelled to Australia with Captain James Cook in 1770. The area was discovered during an expedition of the Georges River by George Bass and Matthew Flinders. The area of first European settlement along the river has been partially preserved as part of the Mirrumbeena Regional Reserve. Bankstown also includes large areas of the Georges River National Park. Railway formed an important part of the development of Bankstown. After the extension of the railway from Belmore to Bankstown in the 1890s, rapid development of the area followed – so much so that the commercial centre of Bankstown moved from its former position in Irish Town (Now Yagoona) on Liverpool Road to the vicinity of Bankstown railway station.

In March 1895 a petition was submitted to the NSW Colonial Government by 109 residents of the Bankstown area, requesting the establishment of the "Municipal District of Bankstown" under the Municipalities Act, 1867. The petition was subsequently accepted and the Municipal District of Bankstown was proclaimed by Lieutenant Governor Sir Frederick Darley on 7 September 1895. The first six-member council, standing in one at-large constituency, was elected on 4 November 1895. With the passing of the Local Government Act 1906, the council area became known as the Municipality of Bankstown.

The Bankstown Bunker was an exact replica of the underground Ops rooms of wartime England, which directed Britain's air defence fighter plane attacks on the invading German Luftwaffe. Entrance to the bunker was obtained through a concrete passageway which was well screened by a grassy slope; a stairway led to a virtual maze of corridors and hallways leading to various sections. There were two points into to the bunker (escape hatches) which were guarded by military police, and access was gained via the bottom level.

The walls of the bunker could almost withstand a direct hit from a 300 pounds (140 kg) bomb.

The former Bankstown City region was approximately 76 square kilometres (29 sq mi) and had a population density of about 21.46 people per hectare. The boundaries of the former Bankstown City were, clockwise, the Prospect water supply pipeline and Liverpool Road (also known as Hume Highway) along the north, Roberts Road, Juno Parade, Koala Road, Punchbowl Road, Canterbury Road and the Salt Pan Creek along the east, the Georges River in the south and the Georges River, Prospect Creek, the Hume Highway and Woodville Road along the west. Salt Pan Creek is a saltmarsh and mangrove swamp that extends from Canterbury Road to Georges River.

Paul Keating Park, in the centre of Bankstown, stands on the old site of the Council Administration building, which burned down in an accidental fire in 1997. The Park is used for a variety of concerts and festivals (including the annual Bankstown Christmas Carols), and is otherwise a large playing field. Nowadays, all of the Council operations are contained in the Civic Tower, adjacent to the Park. Bankstown Town Hall faces opposite. 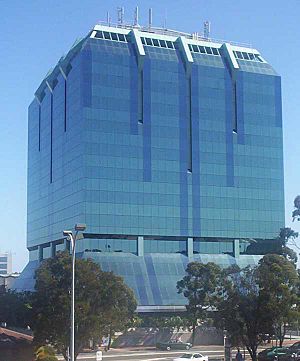 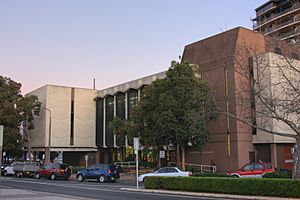 The three-storey complex of Central Bankstown Library, opened in 1983.

Sister Cities of Bankstown include:

All content from Kiddle encyclopedia articles (including the article images and facts) can be freely used under Attribution-ShareAlike license, unless stated otherwise. Cite this article:
City of Bankstown Facts for Kids. Kiddle Encyclopedia.