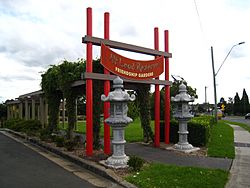 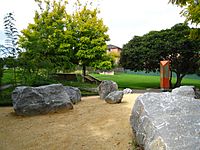 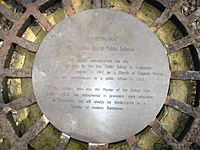 McLeod Reserve is a park situated along the Hume Highway in Bankstown, New South Wales, Australia.

In 1862 the Church of England School was first opened and was commissioned as a public school in 1867. Bankstown's first public school was built where McLeod Reserve is currently situated in 1880. In 1882 49 boys and 36 girls were enrolled, and upkeep expenses totalled 219 pounds, eight shillings and 11 pence. The school's first headmaster was Dugald McLeod who taught at the school since its opening until 1912. The site of the well used by Bankstown Public is today commemorated by a plaque.

The school was demolished in 1924 due to the development of North Bankstown School in the same year.

In August 1999 a friendship garden was established within McLeod Reserve to symbolise Bankstown's sister city relationship with Suita.

All content from Kiddle encyclopedia articles (including the article images and facts) can be freely used under Attribution-ShareAlike license, unless stated otherwise. Cite this article:
McLeod Reserve Facts for Kids. Kiddle Encyclopedia.