City of Rockdale facts for kids

The City of Rockdale was a local government area in southern and St George regions of Sydney, in the state of New South Wales, Australia. The city centre was located 12 kilometres (7.5 mi) south-west of the Sydney central business district, on the western shores of Botany Bay. Rockdale was amalgamated with the neighbouring City of Botany Bay on 9 September 2016 to form the new municipality of Bayside Council.

The Mayor of the City of Rockdale at amalgamation was Cr. Bill Saravinovski, a member of the Labor Party.

Suburbs and localities in the local government area 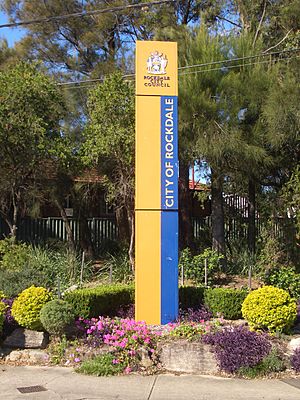 Suburbs in the City of Rockdale were:

The City of Rockdale also managed and maintained the following localities:

The City of Rockdale was originally known as the West Botany Municipality. The Municipality of West Botany was declared on 13 January 1871 and covered 23 square kilometres (9 sq mi) in 1884. It included much of the land which was later used to build Sydney Airport. The West Botany name was officially changed to Rockdale in 1887, when land was being sub-divided for residential development. Among the main developers during this period was Frederick Jamison Gibbes, a member of parliament whose name is perpetuated by Gibbes Street in Banksia.

The area of the municipality was reduced when the mouth of Cooks River was moved further south of its original position in the mid-1940s, to allow for the extension of Sydney Airport. Only a small part of the airport remains in the local government area today. As the city's population increased, more suburbs were created within its boundaries. The Municipality of Rockdale was declared a city in 1995, and is now known as the City of Rockdale.

During 2002, two elected officials of Rockdale City Council were at the centre of an Independent Commission Against Corruption (ICAC) inquiry. The inquiry revealed that the Deputy Mayor, Adam McCormick (Labor) and Councillor Andrew Smyrnis (Liberal) engaged in corrupt conduct with two property developers Con Chartofillis and Terry Andriotakis via two intermediaries, Manuel Limberis and Tony Retsos. The ICAC recommended to the New South Wales Office of the Director of Public Prosecutions (DPP) that charges be laid against all six individuals under the Crimes Act 1900 (NSW) and the ICAC Act 1998 (NSW) s 87. Both councillors resigned from Council and a by-election was held on 31 August 2002 to replace the two disgraced councillors.

Following consideration of the briefs and evidence involved, the DPP commenced action. It was successful in recording convictions, and the known determinations made by the Courts are as follows:

A 2015 review of local government boundaries recommended that the City of Rockdale merge with the City of Botany Bay to form a new council with an area of 50 square kilometres (19 sq mi) and support a population of approximately 153,000. The outcome of the review was an amalgamation with City of Botany Bay to form Bayside Council on 9 September 2016.

The City of Rockdale has sister city links that encourage cultural and social contact, as well as giving the cities involved the chance to explore educational and economic opportunities. The sister cities are:

All content from Kiddle encyclopedia articles (including the article images and facts) can be freely used under Attribution-ShareAlike license, unless stated otherwise. Cite this article:
City of Rockdale Facts for Kids. Kiddle Encyclopedia.