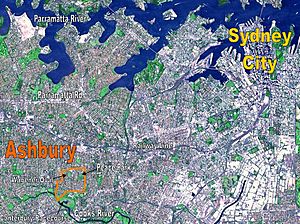 NASA image of Sydney's CBD and inner west suburbs, with borders of Ashbury shown in orange 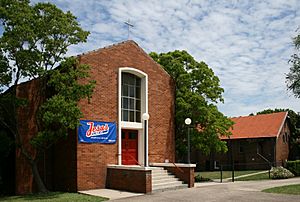 Ashbury is a suburb in the Inner West of Sydney, in the state of New South Wales, Australia. It lies in the local government area of the Inner West Council with some areas in Canterbury-Bankstown Council.and is about 10 kilometres south-west of the Sydney central business district. The postcode is 2193, the same as neighbouring Canterbury.

Ashbury is mostly residential and has no commercial centre, although there are a few shops on King Street. Its major landmark is Peace Park, the highest point in the Canterbury local government area. Ashbury derived its name from the two neighbouring suburbs Ashfield and Canterbury. It is near Canterbury Park Racecourse.

Before the British colony at Sydney, the Ashbury area was home to the Wangal and Cadigal people, clans of the Darug tribe. After pressure from colonists, the British administration began subdividing land in the area surrounding the Sydney settlement and granting it to colonists. The first land grant in the area was 100 acres (40 ha) made to Reverend Richard Johnson (1753-1827), the colony's first chaplain.

The land that extended over Ashbury was known as Canterbury Vale. When it was sold to Lieutenant William Cox in 1800, it covered 600 acres (240 ha). It was then sold to Robert Campbell (1769–1846) in 1803 when it covered 900 acres (360 ha) and then proceeded to purchase more land to Liverpool Road. The estate passed onto his son-in-law Arthur Jefferey and was eventually split up. This area then became known as Goodlet's Bush, after an early settler, John Hay Goodlet. In 1878 Goodlet had bought Canterbury House, which had been built by Arthur Jeffreys.

The South Ashfield Brickworks (later called the Ashbury Brickyard) opened in 1910 from the site of what is now Peace Park. Widescale housing development of the area began in 1919. A primary school began taking students in 1924 and in 1926 changed its name from South Ashfield to Ashbury Public School, leading to the area adopting its own identity. A non-official post office was established on King St in the same year.

There is no train to Ashbury but it is relatively close to both Ashfield Station on the Airport, Inner West & South Line and Canterbury Station on the Bankstown Line. Sydney Buses service Ashbury. The 491 Five Dock to Hurstville bus links Ashbury to both Ashfield and Canterbury Stations from King St. The 413 bus links Ashbury to both the City and Campsie. Route 418 links Ashbury with Burwood, Ashfield, Hurlstone Park, Marrickville, Sydenham, Mascot, Randwick and Bondi Junction via Queen street whilst the 406 connects Ashbury with Five Dock, Ashfield and Hurlstone Park via Victoria Street and Old Canterbury Road. 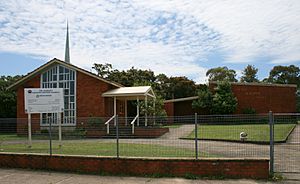 The following people were either born or lived in Ashbury:

All content from Kiddle encyclopedia articles (including the article images and facts) can be freely used under Attribution-ShareAlike license, unless stated otherwise. Cite this article:
Ashbury, New South Wales Facts for Kids. Kiddle Encyclopedia.