Oak Flats is a suburb of Shellharbour, New South Wales, Australia situated on the south western shores of Lake Illawarra and within the South Coast region of New South Wales. It is a residential area of 6,400 people (2006 census)

Oak Flats is one of the 324 suburbs that sits within the Wollongong Statistical District which covers the local authority areas of Wollongong, Shellharbour and Kiama. Oak Flats is locally governed by the Shellhabour City Council which governs 22 suburbs within the area.

The Indigenous people of Yuin are the traditional owners of the South Coast. Traces of Aboriginal occupation of Oak Flats date back to around 15,000 BC.

The area was discovered by George Bass and Matthew Flinders in 1796, whilst free settlers arrived in the nearby town of Shellharbour between 1817 and 1831. As the population in the suburbs around Oak Flats grew, the need for more residential areas became more important. The eastern end of the suburb is commonly known as Balarang.

Ownership of area was first as a grant of 1,200 acres to army officer John Horsley in 1821. The grant was situated on the southern shores of Lake Illawarra and known as the 'Oak Flats Run'. The land was used to run cattle in the area. Development of Oak Flats as a suburb began in 1925 with the Lake Illawarra Township Estate as the centre, followed by the Kembla Vista and Panorama Estates. Economic Depression of the 1930s coupled with the onset of WWII, slowed development. Post WWII migration brought immigrants predominantly Dutch, and German to Oak Flats, and the town began to develop rapidly.

In the early 1930s, Sydney newspapers invited holiday makers to the therapeutic waters of Lake Illawarra as an alternative to spas in the Blue Mountains. Visitors to Oak Flats initially stayed in the two-storey guesthouse on the Boulevarde. Blocks were also purchased and small week-enders erected by visitors keen to return to Lake Illawarra as a holiday destination. A boat shed, where rowing boats could be hired, stood on the end of the small point at Central Park. The shoreline was popular on hot summer days when families would congregate on the grassy banks to rest or swim in the Lake.

Many streets of Oak Flats are named after Australian prime ministers. These include Deakin Street and Barton Street. 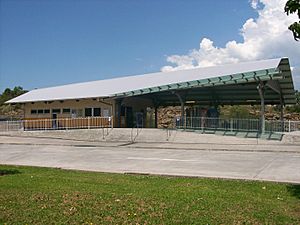 Oak Flats has its own rail station on the NSW TrainLink South Coast line. There is also a bus station/bus stop at the rail station for interchanging with trains.

All content from Kiddle encyclopedia articles (including the article images and facts) can be freely used under Attribution-ShareAlike license, unless stated otherwise. Cite this article:
Oak Flats, New South Wales Facts for Kids. Kiddle Encyclopedia.