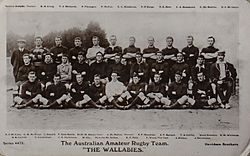 The Wallabies are the national rugby union side of Australia. The first Australian teams played against the British Lions at the Sydney Cricket Ground on 24 June 1899. The Australians won the game 13-3. In 1908, the Australians went to the United Kingdom, France and North America to play. They needed a name and someone suggested the "Rabbits", but the team did not like it and chose the "Wallabies" instead. A wallaby is a small mammal from Australia, very similar to a kangaroo. Until the 1980s, only teams playing overseas were called the Wallabies; when they played in Australia they were called Internationals. Now the national team is called the Wallabies all the time.

All content from Kiddle encyclopedia articles (including the article images and facts) can be freely used under Attribution-ShareAlike license, unless stated otherwise. Cite this article:
Wallabies (rugby) Facts for Kids. Kiddle Encyclopedia.