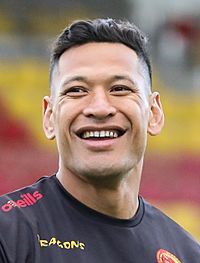 Folau was born in Minto, New South Wales. He is of Tongan ancestry. He later moved to Queensland. He was a student at Marsden State High School with classmates Chris Sandow and Antonio Winterstein.

Folau is a Christian. In the past, he has made social media posts considered by many to be anti-gay. After similar comments were posted on his Instagram in April 2019, his contract was ended by Rugby Australia.

All content from Kiddle encyclopedia articles (including the article images and facts) can be freely used under Attribution-ShareAlike license, unless stated otherwise. Cite this article:
Israel Folau Facts for Kids. Kiddle Encyclopedia.