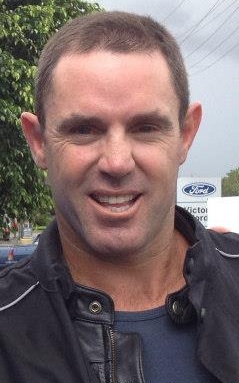 Bradley Scott "Brad" Fittler (born 5 February 1972) is an Australian former professional rugby league player and coach. He played mostly as a five-eighth. His career lasted from 1989 to 2004. He played for the Penrith Panthers until 1995 and later for the Sydney Roosters. He also coached the Roosters from 2007 to 2009.

Fittler was born in Auburn, New South Wales. He is of German ancestry. He has three children; two of whom with his partner Marie Liarris.

All content from Kiddle encyclopedia articles (including the article images and facts) can be freely used under Attribution-ShareAlike license, unless stated otherwise. Cite this article:
Brad Fittler Facts for Kids. Kiddle Encyclopedia.