Jacaranda is a genus of 49 species of flowering plants in the family Bignoniaceae. It comes from tropical and subtropical regions of Central America, Mexico, South America (especially Argentina, Brazil, Peru and Uruguay), and the Caribbean. It is also found in Asia, especially in Nepal. It is found throughout the Americas and Caribbean. It has also been introduced to Australia, New Zealand, India, Fiji and parts of Africa. The genus name is also used as the common name. 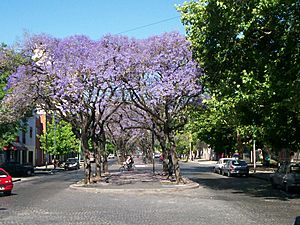 Street in Adelaide with Jacaranda Trees

The species are shrubs to large trees ranging in size from 20 to 30 m (66 to 98 ft) tall. The leaves are bipinnate in most species, pinnate or simple in a few species. The flowers are produced in conspicuous large panicles, each flower with a five-lobed blue to purple-blue corolla; a few species have white flowers. The fruit is an oblong to oval flattened capsule containing numerous slender seeds.

The genus is separated into two sections, Jacaranda and Dilobos DC. Section Jacaranda (which includes Blue Jacarandas) has 18 species. It is found mostly in western South America, Central America, Mexico, and the Caribbean. Section Dilobos, which is thought to be the oldest form, has 31 species. It is found mostly in southeastern Brazil. This includes the Paraná River valley. The kind of wood in the two sections is also different.

Jacaranda can be propagated from grafting, cuttings and seeds, though plants grown from seeds take a long time to bloom. Jacaranda grows in well drained soil and tolerates drought and brief spells of frost and freeze.

This genus thrives in full sun and sandy soils, which explains their abundance in warmer climates. Mature plants can survive in colder climates down to −7 °C (19 °F); however, they may not bloom as profusely. Younger plants are more fragile and may not survive in colder climates when temperatures drop below freezing, so planting of younger trees in pots and moving them into a greenhouse for winter is recommended.

Several species are widely grown as ornamental plants throughout the subtropical regions of the world, valued for their intense flower displays. The most often seen is the Blue Jacaranda. Other members of the genus are also commercially important; for example the Copaia (Jacaranda copaia) is important for its timber because of its exceptionally long bole.

All content from Kiddle encyclopedia articles (including the article images and facts) can be freely used under Attribution-ShareAlike license, unless stated otherwise. Cite this article:
Jacaranda Facts for Kids. Kiddle Encyclopedia.