Minden is a rural town and locality in the Somerset Region, Queensland, Australia. In the 2016 census the locality of Minden had a population of 1,204 people.

The town is 64 kilometres (40 mi) west of the state capital, Brisbane. 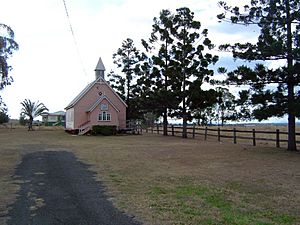 Lutheran Church in the north of the town, 2014

Originally the area was known as Back Plains or Rosewood Scrub but was changed to Minden in 1879 at the request of German settlers, after the town of Minden in Westphalia, Germany. In 1916 during World War I, the name was changed to Frenchton due to anti-German sentiment, but name Minden was restored in 1930.

Minden is located in the Lockyer Valley at the northern foothills of the Little Liverpool Range. The Warrego Highway passes through Minden from east to west. It is the most southerly part of the Somerset Region local government area.

All content from Kiddle encyclopedia articles (including the article images and facts) can be freely used under Attribution-ShareAlike license, unless stated otherwise. Cite this article:
Minden, Queensland Facts for Kids. Kiddle Encyclopedia.