Esk is a town and locality in the Somerset Region in South East Queensland, Australia. In the 2011 census, Esk had a population of 1,755 people. 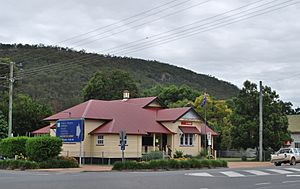 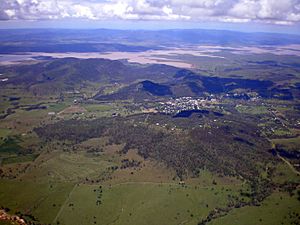 Aerial view of Esk with flooded Wivenhoe Dam in the background, photographed a week after the devastating floods of January 2011

Esk is approximately 64 kilometres (40 mi) northwest of Ipswich on the Brisbane Valley Highway. It was named after the River Esk in Scotland and England. It is the administrative centre of the Somerset Region.

The town of Esk is contained in the Queensland electoral district of Nanango.

The land around Esk was first explored by Captain Patrick Logan in 1830. The town was established to service the short-lived copper mines of Eskdale and Cressbrook Creek. Settlers moved into the region during the 1840s.

Mount Esk Post Office opened on 1 February 1874 (a receiving office had been open from 1873) and was renamed Esk by February 1881.

In 1886, the Brisbane Valley railway line reached Esk from Lowood. Several sawmills were built and in 1904 a butter factory opened. The timber industry declined in the 1920s.

Dairying slowed from the 1960s onwards, which has eventually led to the decline of the town's importance as a major rural centre. 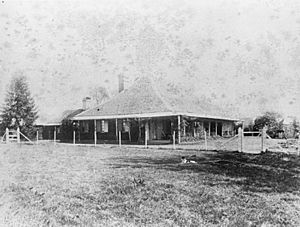 View across the grass to Cressbrook Homestead, circa 1887

The Caboonbah Homestead was destroyed by fire on 10 May 2009.

During the 2010–2011 Queensland floods, the centre of Esk was flooded when Redbank Creek burst its banks for the first time ever.

Esk has a number of heritage-listed sites, including: 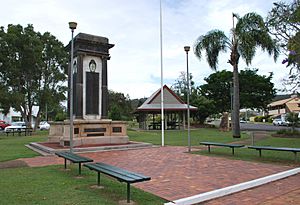 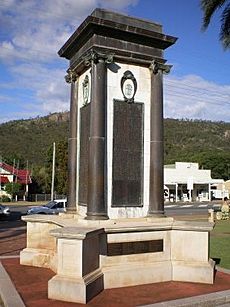 On 30 November 1920, Dr Graham Butler laid the foundation stone of the Esk War Memorial. The finished memorial was unveiled by General Lachlan Chisholm Wilson on 27 August 1921. The memorial records the names of 462 Shire residents who enlisted during the First World War. It also contains bronze honour rolls bearing the names of 83 local men who died during the war. Four commemorative plaques have subsequently been added to the structure. The war memorial stands in Esk Memorial Park, which also contains a memorial to Captain Logan, who was murdered while exploring the Brisbane Valley in 1830. 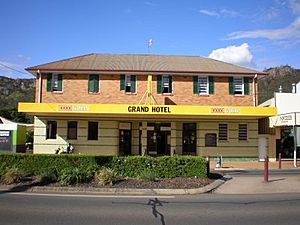 Nearby attractions include Lake Somerset and Lake Wivenhoe, both lakes created by dams, and Ravensbourne and Crows Nest National Parks.

The historic Bellevue Homestead is located in the area. Also close by are the peaks Glen Rock and Mount Esk.

All content from Kiddle encyclopedia articles (including the article images and facts) can be freely used under Attribution-ShareAlike license, unless stated otherwise. Cite this article:
Esk, Queensland Facts for Kids. Kiddle Encyclopedia.