Kids Encyclopedia Facts
This page is about the dam. For the town, see Somerset Dam, Queensland.

The Somerset Dam is a mass concrete gravity dam with a gated spillway across the Stanley River in Queensland, Australia. It is within the locality of Somerset Dam in the Somerset Region in South East Queensland. The main purpose of the dam is the supply of potable water for the Brisbane, Gold Coast and Logan City regions. Additionally, the dam provides for flood mitigation, recreation and for the generation of hydroelectricity. The impounded reservoir is called Lake Somerset.

The dam, lake and surrounding village of Somerset are named in honour of Henry Plantagenet Somerset, a local grazier and Member of the Legislative Assembly of Queensland who represented the seat of Stanley from 1904 until 1920. 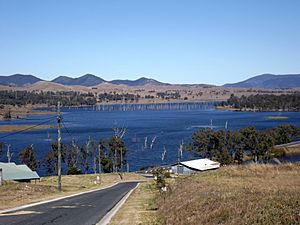 The dam is located approximately 115 kilometres (71 mi) northwest of Brisbane in the Somerset Region and 80 kilometres (50 mi) north of Ipswich.

A water level of 90% is the optimum capacity for keeping evaporation rates to a minimum. Dam operators discharge water into the Wivenhoe Dam downstream to hold Somerset at this level when inflows are occurring.

The site was first suggested for the location of a dam by Henry Somerset, the owner of Caboonbah Homestead, after the 1893 Brisbane floods caused severe damage to Brisbane River valley residents downstream. A commission of enquiry recommended Stanley Gorge as the site for a dam in 1928, but it was not until 1933 that the Forgan Smith Labor Government adopted the reservoir's construction as a major job creation project to counter job losses caused by the Great Depression.

Construction began in 1935. Worker's cottages had to be built and other facilities were constructed to attract 1,000 construction workers and their families to the area. By 1942 the dam was almost complete when workers were diverted to the war effort, with many being redeployed to construct the Cairncross Dockyard in Brisbane. Work on the dam recommenced in 1948. Opened in 1953 when structural work was finished, it was not until 1958 that the dam was officially named after Henry Somerset and the next year before all work related to the dam, including the hydroelectric power station was complete.

There are two public access areas on Somerset Dam, Kirkleigh and The Spit. Both locations have multi-lane, concrete boat ramps with facilities for day-trippers. Camping is permitted and caravans are catered for at Kirkleigh and below the dam wall at Somerset Park in the small town of Somerset Dam. During busy periods the two camping locations can be filled to capacity with room for a maximum of 2,200 campers at Kirkleigh and 800 at Somerset Park. Lake Somerset Holiday Park's Kirkleigh campground also features cabin accommodation at the waterfront and direct access to the dam from a grassy spit. The dam contains 30 kilometres (19 mi) of navigable waterway.

A view of Lake Somerset

All content from Kiddle encyclopedia articles (including the article images and facts) can be freely used under Attribution-ShareAlike license, unless stated otherwise. Cite this article:
Somerset Dam Facts for Kids. Kiddle Encyclopedia.