Government of Queensland facts for kids 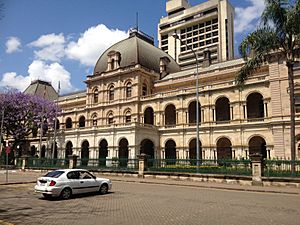 Parliament House in Brisbane; the meeting place of the Parliament of Queensland 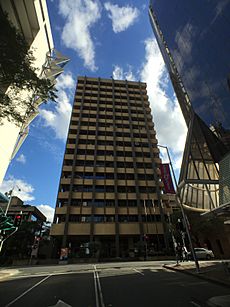 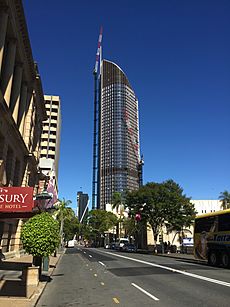 1 William Street was completed in 2016

The Government of Queensland operates under the Westminster system, a form of parliamentary government based on the model of the United Kingdom. The Governor of Queensland, as the representative of the Monarch, holds nominal power, although in practice only performs ceremonial duties. The Parliament of Queensland holds legislative power, while executive power lies with the Premier and Cabinet, and judicial power is exercised by a system of courts and tribunals.

The Cabinet of Queensland is the government's chief policy-making organ, and consists of the Premier and all ministers.

The Queensland Government delivers services, determines policy and regulations, including legal interpretation, by a number of agencies grouped under areas of portfolio responsibility. Each portfolio is led by a government minister who is a member of the Parliament. As of April 2016[update] there were nineteen lead agencies, called government departments, that consist of:

A range of other agencies support the functions of these departments.

All content from Kiddle encyclopedia articles (including the article images and facts) can be freely used under Attribution-ShareAlike license, unless stated otherwise. Cite this article:
Government of Queensland Facts for Kids. Kiddle Encyclopedia.