Toogoolawah ( too-GOO-lə-wə) is a rural town and locality in the Somerset Region, Queensland, Australia. In the 2016 census, Toogoolawah had a population of 1,279 people.

Toogoolawah is derived from the Aboriginal words "dhoo" (a generic term for tree) and "goo/lawa", meaning "crescent shaped" or "bent like a crescent moon". The name probably referred to a tree with a deformed trunk which stood on the site in Bulimba, rather than to the supposed shape outlined by the Brisbane River as it rounds Bulimba Point, as has been alleged.

What is now Toogoolawah township was surveyed privately when Cressbrook estate was subdivided and sold as dairy farms in 1904. The town plan was not registered with the survey office until 1 June 1909. The extension of the Brisbane Valley railway line from Esk to the new town (18.69 kilometres or 11.61 miles) was opened on 8 February 1904. James Henry McConnel, owner of Cresbrook station, suggested the name Bakewell after a village in Derbyshire, for the new town and railway station. The Railways Department however favoured the use of Aboriginal names, so McConnel then suggested Toogoolawah, the Aborigines' name for the locality in the Brisbane suburb of Bulimba where McConnel's town house was situated.

A Toogoolawah receiving office was opened in June 1904 and was elevated to post office status in July 1905. Toogoolawah State School opened on 30 May 1905. A condensed milk factory was built shortly after the railway station was opened. The factory was closed in 1929, after Nestlé moved all its condensed milk production to Victoria, resulting in the town's population decreasing by half. 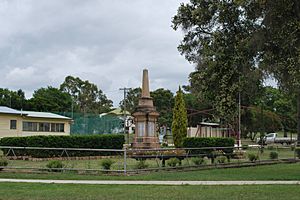 The Toogoolawah War Memorial commemorates those who served in World War I. Unlike most war memorials that were erected after the war, the Toogoolawah memorial was unveiled during the war on 31 March 1917 by the Rev. Chaplain Merrington.

Toogoolawah was partially cut off by flooding as a result of the 2010–2011 Queensland floods.

Toogoolawah is home to a world-famous fun-jumping and tandem skydiving centre, once featured on the third season of The Mole in 2002.

Toogoolawah has a number of heritage-listed sites, including:

All content from Kiddle encyclopedia articles (including the article images and facts) can be freely used under Attribution-ShareAlike license, unless stated otherwise. Cite this article:
Toogoolawah Facts for Kids. Kiddle Encyclopedia.