Dayboro is a rural town and locality in the Moreton Bay Region, Queensland, Australia. In the 2016 census, the locality of Dayboro had a population of 2,119 people. 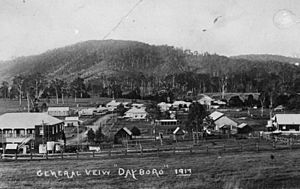 Dayboro was first known as Hamilton, having been so named after a farmer, Hugh Hamilton, who was appointed Receiving Officer for mail in 1875. In 1892, it became known as Terrors Creek from the creek on which it is situated. The creek and the adjoining area, which became known as Terrors Paddock, derived their names from a grey Arab stallion, Terah, owned in the 1850s by Captain John Griffin of the Whiteside run.

In 1917, however, as the Postmaster General declared that Terrors Creek sounded too much like Torrens Creek, once again, the township acquired a new name. Although the first known inhabitant, John McKenzie, operated a pit sawmill just south of the townsite from 1866, the third and final name selected for Dayboro honours another notable early settler, William Henry Day. Day was Clerk of Petty Sessions and later Police Magistrate in Brisbane. He first selected land in the Dayboro area in the late 1860s and pioneered sugar growing on his extensive properties in the district.

Settlement subsequently spread north and south along the North Pine River as more than 100 people took up selections in the Terrors Creek area. Timber, maize, vegetables and dairy products provided the main income for the settlers. The failure of Day's sugar growing experiment within a few years brought about the gradual breaking up of his large land holdings and facilitated the further development of the area. A store and hotel, the nucleus of the town, were established in the early 1890s and these were followed by a sawmill around 1900 and the Silverwood Butter Factory in 1903.

In 1915, in an article urging the extension of the railway from Enoggera to Terror's Creek, the township was described as "being set prettily on a hillside, and being the centre of miles of agricultural, dairying and fruit lands". According to the article [Australian Pastoralist, Grazing Farmers' and Selectors' Gazette, September 1915, Supplement, pp. 2–3], there was "an up-to-date butter factory, bank, several stores, an excellent hotel, a large sawmill, public hall, etc., and a community ever ready to co-operate in the advancement of their district".

On 25 September 1920 a railway line to Dayboro was opened, running through Samford from Ferny Grove. There were a number of stations servicing the line, including at Kobble Creek, Samsonvale, and Samford. The line serviced Dayboro and surrounding areas for 35 years, continuing to operate until 1 July 1955 when it closed due to declining traffic, largely from the increased access to the area by road traffic.

The Dayboro line is also famous for Queensland's worst rail disaster, which occurred on the morning of 5 May 1947 near Camp Mountain. For more on the accident see Camp Mountain rail accident.

Remnants of the railway line can still be found throughout Dayboro and surrounding districts, including former railway bridges over the North Pine River, and cuttings along Strong Road. Railway pits were once located between the local swimming pool and sawmill (now the Old Mill Animal Hospital).

All content from Kiddle encyclopedia articles (including the article images and facts) can be freely used under Attribution-ShareAlike license, unless stated otherwise. Cite this article:
Dayboro, Queensland Facts for Kids. Kiddle Encyclopedia.