Samsonvale is a rural locality in the Moreton Bay Region, Queensland, Australia. In the 2016 census, Samsonvale had a population of 590 people. 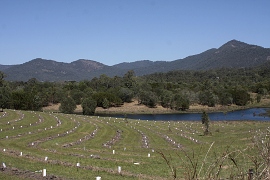 Samsonvale was occupied by the indigenous people, who named the area Tukuwompa.

Samsonvale began as a pastoral run in 1845 predominately of the Joyner family, after whom a nearby suburb is named.

The history of Samsonvale is, it seems, one of forced resumptions with three quarters of the Joyner's original pastoral run in the 1860s being taken from them.

A little over one hundred years later, the district's farming families were once again be forced from their farms, this time to allow for the construction of the North Pine Dam.

For the first half of the last Century Samsonvale was predominantly a dairy farming community centered on a station on the Dayboro railway line.

The construction of the North Pine Dam and the flooding of Lake Samsonvale in the 1970s caused a series of forced resumptions of family farms. The flooding of the Lake also closed the Presbyterian Church, community hall, and post office.

All that remains today at the site of the old village is a cemetery with much of the former district underwater, along with the original Samsonvale pastoral run and much of the district's best farming land.

The current Samsonvale Rural Fire Brigade facility sits above what was once the center of the Kobble Creek community.

In 2006, during a drought seeing water levels of Lake Samsonvale falling to unprecedented lows, archeological works were considered by the local council to preserve historic artifacts from flooded homesteads dating back to the 19th Century. In 2010 Lake Samsonvale is once again filled to capacity, covering the historical sites and much of the district's best farming land.

The area around the cemetery has a natural beauty and a large biodiversity, with over 250 species of bird recorded.

All content from Kiddle encyclopedia articles (including the article images and facts) can be freely used under Attribution-ShareAlike license, unless stated otherwise. Cite this article:
Samsonvale, Queensland Facts for Kids. Kiddle Encyclopedia.