The origin of the suburb name is from an early inhabitant by the name of Tom Petrie. The township was named Petrie after his death. Prior to this, the area was known as North Pine. Tom Petrie was a highly regarded individual in the area through his community work and his cooperation with the local Aboriginal inhabitants.

Petrie is a suburban village with new housing developments on land which was previously used for pine plantations and agriculture. Petrie railway station provides access to regular Queensland Rail City network services to Brisbane and Ipswich, as well as Caboolture and the Sunshine Coast. The Gympie Road, Dayboro Road and Anzac Avenue roundabout junction and surrounding area encompass the town centre which includes retail, commerce and mechanical industries. 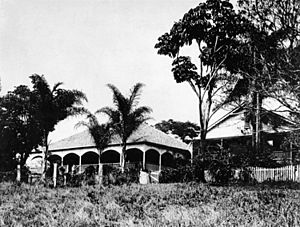 Petrie has a number of active community groups including the Phoenix Masonic Lodge. Founded in 1894, it is the oldest masonic lodge in the area. Since 1929 Phoenix Lodge has been meeting at the Petrie Masonic Centre in Whites Road. 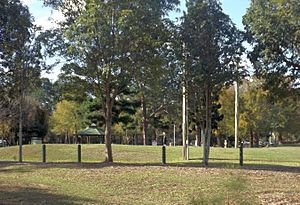 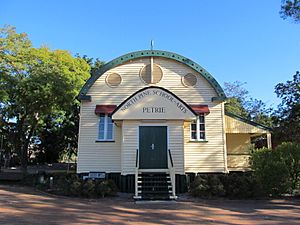 Petrie has a number of heritage-listed sites, including:

Tourism in Petrie is mainly focused on recreation. Recreational activities such as bushwalking, canoeing, fishing and horseriding take place. Signage at Wyllie Park on the Lawnton / Petrie border provides information relating to tourism in the area.

All content from Kiddle encyclopedia articles (including the article images and facts) can be freely used under Attribution-ShareAlike license, unless stated otherwise. Cite this article:
Petrie, Queensland Facts for Kids. Kiddle Encyclopedia.