Kallangur is a suburb in the Moreton Bay Region, Queensland, Australia. In the 2016 census, Kallangur had a population of 20,405 people.

The area once belonged to Mrs. Griffin of Whiteside, west of Petrie, and was acquired by a Scottish migrant by the name of Thomas Petrie in 1855. The name Kallangur originates from the Aboriginal word kalangoor, meaning a goodly or satisfactory place. 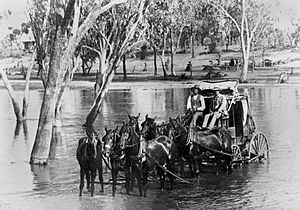 Gympie Road (now Old Gympie Road) passed through Kallangur from Brisbane to Gympie. It was a route travelled by Cobb & Co coaches.

Kallangur grew in the early twentieth century as it was on the main road route to the Redcliffe peninsula before the construction of the Hornibrook Bridge in the 1930s. More recent development has been in response to the general housing demand in the northern growth corridor. The main thoroughfare in Kallangur is route 71, Anzac Avenue.

An ANZAC memorial gate was erected along with a bronze statue on the corner of Anzac Avenue and Goodfellows Road. The new Memorial Gardens was unveiled in front of the North's Leagues and Services Club in 2005 by the former Minister for Veterans' Affairs De-Anne Kelly.

Kallangur railway station was completed in 2016.

The Kallangur Bypass, also referred to as the Petrie to Mango Hill transport corridor, is a proposed infrastructure project to alleviate traffic congestion in this area. The preserved transport corridor lies adjacent to the western section of the Redcliffe Peninsula railway line. The infrastructure project is a road between Petrie and Mango Hill, and is pending Queensland Transport decisions and funding.

Although not an official song, the musical act, Jaded Cadence, has released a song about living in Kallangur, including a verse about the Bruce Highway, Redcliffe, Maroochy, and Cavill Avenue. 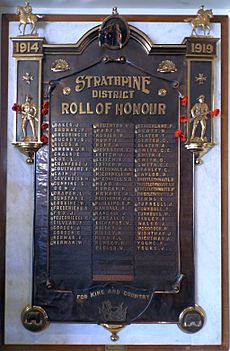 Kallangur has a number of heritage-listed sites, including:

Despite its name, Dakabin State School is a government primary (Prep-6) school for boys and girls at Sheaves Road in Kallangur (27°14′16″S 152°59′12″E﻿ / ﻿27.2378°S 152.9867°E﻿ / -27.2378; 152.9867﻿ (Dakabin State School)). In 2018, the school had an enrolment of 600 students with 45 teachers (39 full-time equivalent) and 34 non-teaching staff (21 full-time equivalent). It includes a special education program. It also includes the POWER Positive Learning Centre, a specific-purpose primary (3-7) program for children whose behaviours are incompatible with mainstream schooling; the aim of the centre is to ultimately re-integrate the child back into mainstream schooling.

Pinnacle Academic College is a private primary school (Prep-6) for boys and girls at the same site as Charlotte Mason College but at the other end of the site. It offers individualised self-directed education.

All content from Kiddle encyclopedia articles (including the article images and facts) can be freely used under Attribution-ShareAlike license, unless stated otherwise. Cite this article:
Kallangur, Queensland Facts for Kids. Kiddle Encyclopedia.