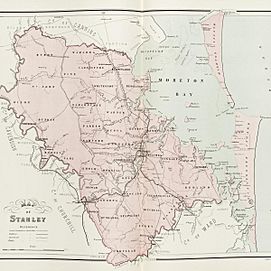 The County of Stanley is a cadastral division centred on the city of Brisbane in Queensland, Australia, that is used mainly for the purpose of registering land titles. It was named after Edward Stanley, who was three times British prime minister in the 1850s and 1860s. It is bounded by the Logan River in the south, the Brisbane River at what is now Lake Wivenhoe in the west, the Stanley River at what is now Lake Somerset in the north-west, and Caboolture River in the north. It includes Moreton Island and Stradbroke Island, and extends west to Ipswich's CBD, south to Loganlea and north to Morayfield.

Stanley was formerly a county in New South Wales between the establishment of Brisbane in 1826, and the formation of Queensland as a separate colony in 1859, and was officially established by proclamation on 27 February 1843. It was generally understood (though only somewhat formally defined) to include the land between the 27th and 28th parallels of latitude, Moreton Bay and the western ranges, covering an area of 1,724 square miles (4,470 km2). In 1852 it had a population of 2,000. Wheat, coffee, cotton and tobacco were described as being important crops. By 1863, the county had contracted to its present boundaries.

On 7 March 1901, the Governor of Queensland proclaimed new boundaries under the Land Act 1897, and Stanley was described as follows:

Bounded on the south by the county of Ward; on the west by the western boundaries of the parishes of Undullah, Ipswich and Chuwar to the Brisbane River, by that river and the Stanley River upwards to Oaky Creek, by that creek upwards to the west boundary of the parish of Byron [...] by the north boundaries of the parishes of Pine, Caboolture and Burpengary; and on the east by the Pacific Ocean,—including Moreton and Stradbroke Islands.

Stanley is divided into parishes, listed as follows:

All content from Kiddle encyclopedia articles (including the article images and facts) can be freely used under Attribution-ShareAlike license, unless stated otherwise. Cite this article:
County of Stanley, Queensland Facts for Kids. Kiddle Encyclopedia.