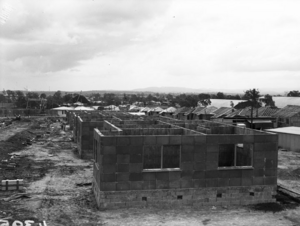 Houses being built at Coopers Plains, 1952

Coopers Plains is a southern suburb in the City of Brisbane, Queensland, Australia. In the 2016 census, Coopers Plains had a population of 5,483 people.

Coopers Plains remained rural until the 1940s. The United States Army built a barracks adjacent to the railway station 1942, which after the war became the Australian Army s Damour Barracks.

All content from Kiddle encyclopedia articles (including the article images and facts) can be freely used under Attribution-ShareAlike license, unless stated otherwise. Cite this article:
Coopers Plains, Queensland Facts for Kids. Kiddle Encyclopedia.