Robertson is an outer-southern suburb in the City of Brisbane, Queensland, Australia. In the 2016 census, Robertson had a population of 4,973 people.

The median age of the Robertson population was 32 years, 5 years below the Australian median.

The school is known for its high performing academic results, with a school ICSEA (Index of Community Socio-Educational Advantage) value of 1126 in comparison to the average of 1000. It scores a school ICSEA percentile of 91.

Robertson is considered a location of reasonable public transport service. The Brisbane City Council bus lines 130 and 140 that pass through Mains Road at the 'Mains Road at Robertson bus stop', operated by Translink, the state public transport operating service, are run on a network of 'no timetable needed' high frequency buses known as Bus Upgrade Zone (BUZ) services.

According to the BCC, BUZ services operate daily: 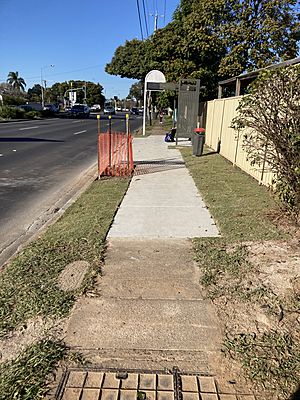 The 40 bus line that runs from Browns Plains, Queensland is a direct express 'City express' service that runs through most main roads as the 130 bus line, however has altered commencement points. This service joins onto the South East Busway as well.

Other services that run through Robertson are the 135and 120, which both lead to the city. Other services available from the Mains Rd at Robertson bus stop are the P137, Creek St CBD express, the 139, direct link to the University of Queensland via the busway, and the 598 and 599, the Great Circle Lines passing through many suburbs in Brisbane. 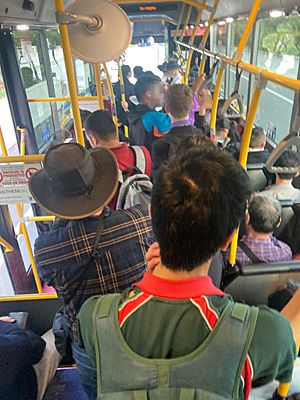 Overcrowding on the 130 and 140 bus lines have widely considered an issue for many students and residents in the suburb, and those neighbouring suburbs of Sunnybank, MacGregor, and Sunnybank Hills from 2006 to 2014. However, due to an increase in Translink fares increase, many resorted to privatised transportation, slowly emptying capacity and reducing demand for these public transport lines, being then reported as Australia's most expensive public transport system.

However, from 2019 to August 2021, ridership and patronage amongst these lines have slowly increased. Although many other lines throughout Brisbane have upgraded to Bi-articulated buses, the 130 and 140 have not received any upgrades, despite increase in patronage. The council has been unable to provide higher capacity vehicles, especially to cater for such demand during after-school rush from the South Bank busway station due to a high percentage of students from Brisbane State High School travelling on these services from 15:00 AEST to 15:30 AEST. Morning peak hour rush can also be uncomfortable, especially with increased patronage from the newly constructed QSAC Mains Road Park 'n' ride.

All content from Kiddle encyclopedia articles (including the article images and facts) can be freely used under Attribution-ShareAlike license, unless stated otherwise. Cite this article:
Robertson, Queensland Facts for Kids. Kiddle Encyclopedia.