Nundah (previously called German Station) is an inner suburb in the City of Brisbane, Queensland, Australia. It contains the neighbourhood of Toombul. In the 2016 census, Nundah had a population of 12,141 people.

Prior to European settlement, Nundah was inhabited by Aboriginal people from the Turrbul tribe. Nundah is primarily a residential suburb, which straddles Sandgate Road, one of the major arterial roads of Brisbane's north. It was first settled by Europeans in the mid-19th century, although the suburb remained primarily a rural area until it was connected to Brisbane via railway in the 1880s. Originally considered a working-class suburb, the area has become gentrified in recent years, and today features a mix of traditional worker's cottages and modern high-density apartment blocks. It is close to the Centro Shopping Centre.

Nundah is a mixed-density residential suburb, with some light industry and a commercial retail area concentrated on Sandgate Road. It is adjacent to the suburbs of Clayfield, Northgate and Wavell Heights, and is dominated by a large ridge that runs from the northwest to the southeast. The "Nundah Village" shopping district and Nundah State School are on this ridge, while the George Bridges Tunnel bisects it along Sandgate Road.

The suburb includes the locality and formerly distinct suburb of Toombul, which is centred in the south of Nundah, around Sandgate Road. Various facilities in Nundah are named after this locality, including the large shopping centre Centro Toombul, Toombul Bus Station and the Toombul railway station.

Schulz Canal runs through Nundah, bisecting the Toombul Shopping Centre Carpark. The low elevation of the carpark makes it particularly susceptible to flash flooding during peak storm seasons – often claiming the cars of unwary shoppers inside the centre and those attempting to cross the Melton Road bridge. The estuary of the canal is a moderately popular recreational fishing spot.

Like most of Northern Brisbane, the area around Nundah was dominated by the Turrbul tribe. Their traditional coastal trade route passed through Nundah, near the modern-day Hedley Avenue. There are also many significant Aboriginal sites near Nundah, such as Dinah Island, which was reportedly the site of the last traditional Aboriginal burial in the Brisbane area. There were a number of bora rings in the area, indicating that the Nundah area was densely populated by Aboriginal people before European settlers arrived. 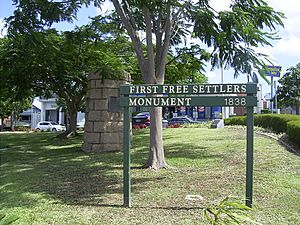 The first permanent European settlement in the area was a mission built in 1838 by German Lutheran missionaries, under the guidance of Reverend Carl Wilhelm Schmidt and later Reverend Christoph Eipper with the aim of bringing Christianity to the local Aboriginal people. They first called the area "Zion", and the mission was located in the vicinity of the modern-day street "Walkers Way". It later became "German Station". The explorer Dr. Ludwig Leichhardt visited the area in 1843, and spoke very highly of the mission, but despite this the mission met with limited success and was closed at the behest of the colonial government in 1846. This first settlement is nonetheless commemorated with a monument at the corner of Sandgate Road and Wood Street unveiled in 1938 by the then Premier of Queensland William Forgan Smith. The names of these German settlers can be seen in the names of streets in Nundah and surrounding suburbs such as Rode Road and Gerler Road.

Growth of the village of German Station

A prominent local citizen who contributed significantly to the development of the village of German Station was George Bridges (1820–1898). George and his young family immigrated from Wilstead, Bedfordshire, England to Queensland in 1852 aboard the "Marie Somes". In 1855, he acquired 64 acres (26 ha) of land north of Buckland Road and east of Sandgate Road for farming. However, as Sandgate became an increasingly popular holiday destination, the increasing volume of coach traffic along Sandgate Road encouraged him to open a hotel, which became a popular stop being roughly halfway between Brisbane and Sandgate. The first hotel was called the Kedron Hotel but the third and longest-running hotel was known as the Kedron Brook Hotel and was located alongside Sandgate Road (now Bage St) on the SW corner of his property. Emboldened by the success of his hotel ventures, George Bridges looked for other commercial opportunities. He observed that Sandgate Road at that time did a dog-leg around the SW corner of his property (along Buckland Road) which forced traffic to travel up and over Donkin's Hill. So he created a short-cut across the SW corner of his property that avoided the hill, which was much appreciated by the travellers, allowing George Bridges to sell off parcels of land along this new unofficial piece of Sandgate Road to commercial enterprises, which serviced both the travellers and the local farming community. This unofficial short-cut grew into the Nundah Village shopping street that exists today and eventually became the official route of Sandgate Road. Around 1872, George and his wife Mary retired to Burpengary and began to progressively sell off the land of their German Station property as the village developed.

Creation of the suburb of Nundah

German Station remained an agricultural area until the 1880s. In 1881, Queensland State Government purchased a strip of land across George Bridges's property to build a railway link between Brisbane and Sandgate. The railway opened in 1882 and resulted in a suburban residential construction boom on Brisbane's northside. This urban sprawl was also encouraged by the Undue Subdivision of Land Prevention Act 1885, which mandated minimum lot sizes for new urban developments. The village of German Station became known as a location where working-class families could obtain cheap housing on reasonably sized lots not too far from the city. George Bridges sold off his remaining land for residential development in the new suburb.

A railway station called "German" was created in 1882 (again on land originally owned by George Bridges), because they wanted the station to be called "German Station" rather than "German Station Station". However, six weeks after the railway station opened, it was renamed "Nundah", derived from the Aboriginal name for the area. In 1888, the name of the Post Office was also changed to Nundah, signalling the renaming of the new suburb. However, the name "German Station" persisted for many years. For example, the German Station National School did not become Nundah State School until 1896. For many years it was common to find references to "Nundah" with the annotation "formerly German Station" in newspapers and advertisements, until the name "Nundah" was well established.

From 1890, Nundah was the seat of the Shire of Toombul, which was absorbed into the City of Greater Brisbane in 1925. The Toombul Shire Hall still exists as a community centre.

In 1909, Surrey Street in Nundah became the site of the first public housing dwelling in Queensland. In the early twentieth century, Nundah became a major suburban centre, due to its location on Sandgate Road, one of Brisbane's busiest arterial roads, and the adjacent Nundah railway station. Sandgate Road and nearby streets were lined with shops, pubs, cinemas and other commercial premises.

Nundah's commercial precinct suffered a precipitous decline from the 1970s with the construction of the nearby Westfield Shoppingtown (Later Centro) Toombul shopping centre. Increasing motor traffic along Sandgate Road also reduced Nundah's appeal as a shopping precinct as it was difficult to park. Gradually many shops closed, and those that opened in their place were often "low-class" establishments such as pawn brokers, charity stores etc. that were unappealing to most shoppers, driving them increasingly to shop at Toombul.

However, in 2001 a road tunnel was constructed under nearby Bage Street, diverting through traffic away from the suburban centre. There was considerable popular support to name the road tunnel after George Bridges in recognition of his contribution to the development of the district and the fact that the tunnel was located on his original land holding. However, the local member Liddy Clark would not support it for fear it would offend the Aboriginal community. In 2009 as part of Queenslands 150th Birthday Celebrations, the Nundah Bypass Tunnel was renamed "George Bridges Tunnel".

In 2008 the Brisbane City Council suburban renewal programme has seen new art installations, cafés and commercial enterprises open in Nundah, creating a village-like atmosphere along the now-quiet Sandgate Road. The suburb has now become popular among white collar workers seeking relatively inexpensive housing and apartments only a moderate distance from the Brisbane CBD. Since then, along with the rest of the city, housing prices in the area have skyrocketed, pricing most of the traditional working class out of the suburb. 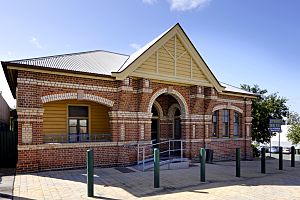 The Toombul Shire Hall is a heritage-listed building in Nundah. 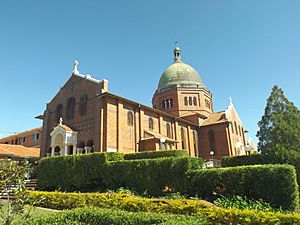 Nundah has a number of heritage-listed sites, including:

The Nundah Bypass is a 285-metre-long (935 ft) road tunnel, open to general traffic, that runs underneath the Nundah Village commercial area. Completed in 2001, it provides an alternative route to traffic travelling along Sandgate Road, allowing motorists to avoid the narrow streets of the village area, and reducing traffic congestion for local residents.

The Toombul District Cricket Club is directly across Duke Street from Nundah Train Station. It covers 3.5 hectares, and is bordered by York Street, Duke Street, Melton Road and Jenner Street. The club was founded in 1882, and has been based at Oxenham Park in the heart of Nundah since 1912.

The cricket club provides a family friendly, relaxed atmosphere for local residents to take in a match on Saturdays and Sundays during summer, and enhances the village feel of Nundah by being an exceptionally welcoming club, with full bar and canteen facilities open to locals. In November 2016, Toombul began renovations to the clubhouse including a rooftop bar, in line with the gentrification and development of Nundah. 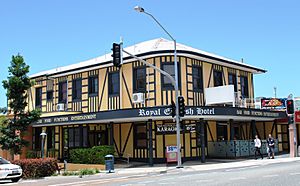 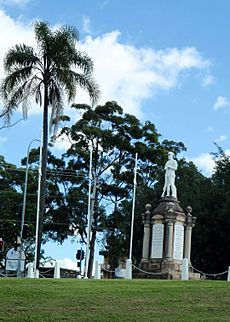 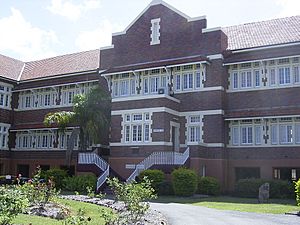 An index to people mentioned in the book From Pioneering Days: Nundah Northgate Virginia by Nundah & Districts Historical Society Inc can be found here. While many of the people listed are residents of the district, some people may have had only a peripheral involvement with it.

All content from Kiddle encyclopedia articles (including the article images and facts) can be freely used under Attribution-ShareAlike license, unless stated otherwise. Cite this article:
Nundah, Queensland Facts for Kids. Kiddle Encyclopedia.