Northgate is a suburb of Brisbane, Australia located 9 kilometres (5.6 mi) north of the Brisbane CBD. The land area comprises industrial and residential areas. Inter war homes can be found on Northgate Hill—elevated land that rises west of the railway station; and post World War II real estate on "the flat"—the large arc of flat land that extends to Moreton Bay at Nudgee Beach with most of the housing stock being post WWII. 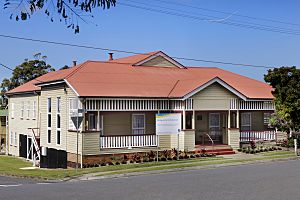 Northgate railway station is also the junction for the Shorncliffe and North Coast Lines, with frequent services to the City, Shorncliffe and Caboolture and interurban services to Nambour/Gympie. Northgate train station is the branching point were both Shorncliffe and Caboolture trains can be caught, meaning that a lot of express trains stop at Northgate, for passengers making a switch between branches. Brisbane Transport also operates the "306" bus service through this suburb. The railway station was the limit of train service until the line was extended to Sandgate in the late 1880s.

All content from Kiddle encyclopedia articles (including the article images and facts) can be freely used under Attribution-ShareAlike license, unless stated otherwise. Cite this article:
Northgate, Queensland Facts for Kids. Kiddle Encyclopedia.