Sandgate is a northern coastal suburb in the City of Brisbane, Queensland, Australia. In the 2016 census, Sandgate had a population of 4,909 people.

The town became a popular destination for the people of Brisbane in the early 20th century and remains popular due to its coastline, including Lovers Walk along the bay between Sandgate and neighbouring Shorncliffe as well as Moora Park and Beach.

Sandgate is situated on the coastline, along Bramble Bay. It is connected to the Queensland Rail City network. The western border of the suburb is marked by the Gateway Motorway. A large section to the west of the suburb is known as the Deagon Wetlands which is part of the North East Wetlands of Brisbane.

The name of the area may have been inspired by Sandgate on the coast of county Kent, England by James Burnett, an early surveyor in the region. Sandgate in Kent had a military camp, Shorncliffe Camp, on top of the cliffs adjacent to it. Sandgate in Brisbane also has an adjacent suburb called Shorncliffe. 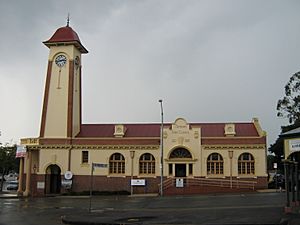 It is recorded that the Turrbul people, who long inhabited the seashore, the creeks and lagoons, in what we know as the locality of Nudgee Beach to the Pine River, were a branch of the clan of the Yugarabul speaking people. This larger clan inhabited the area from North Brisbane and along the coastline of Nudgee, Sandgate to Caboolture. In their language the local Turrbal clan called their coastal land "Warra" – "an open sheet of water". This land we call Shorncliffe, Sandgate and Brighton. Their existence depended upon their knowledge of the seasons and their surroundings. Spears, nullas and boomerangs were used in hunting and woven nets for fishing. 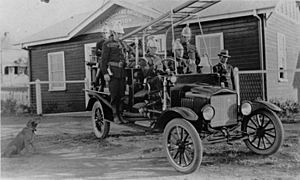 Sandgate Fire Brigade outside the fire station in 1923

Land in Sandgate became available in 1853, allowing a small seaside settlement to develop. By 1874, coach services connected Sandgate to Brisbane. The coming of the railway in 1882 promoted more rapid development of the Sandgate area. Travel to Brisbane by train could be completed in less than half an hour. On 29 April 1880, Sandgate was proclaimed a municipality known as the Borough of Sandgate. The Local Authorities Act 1902 replaced all Divisions and Boroughs with Towns and Shires, creating the Town of Sandgate on 31 March 1903. This new status meant a town council was formed to guide the development of the local area. Initially, the council chambers were located in Shorncliffe. However, following a fire which destroyed the council chambers in 1910, a much larger town hall was opened in 1911. The Sandgate Town Hall was extensively renovated in 2011 to mark the 100th anniversary of the hall.

The Sandgate Council, which operated from 1880 to 1925, had to provide a range of services for the growing community. These included a fire department, ambulance, and sanitation facilities, as well as maintaining roads and regulating local development. In October 1925 Sandgate Council was amalgamated into the City of Brisbane.

As well as the town hall, Sandgate includes another historic landmark, which is the Baptist church on the corner of Cliff Street and Flinders Parade. The church first opened in the late 19th century (1887) and has since undergone multiple restorations, yet has continued to remain in its original structure - although it is no longer operating as a church, being now utilised as a child care centre. 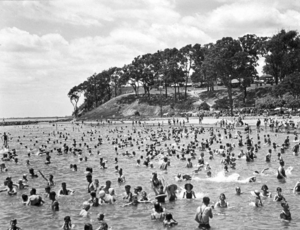 Swimming at Moora park in 1937

Sandgate boasted clean beaches that were a popular weekend destination, with thousands of people visiting from Brisbane to escape the heat. Boating, swimming and golf were the most common sporting activities. Moora Park was the location for dances and open-air films.

Sandgate has a number of heritage-listed sites, including: 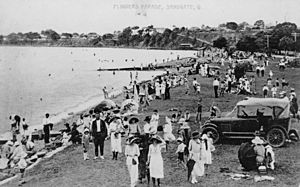 Most of Sandgate's facilities are located along Brighton Road, the main street in Sandgate, which include numerous banks, shops, services and a small shopping centre anchored by a Woolworths supermarket. Woolworths previously traded adjacent to the site of the centre until the opening of the new store in February 2009. The old Woolworths site has been redeveloped as an Aldi supermarket, opened in December 2013. The Sandgate railway station on the Shorncliffe line is a short walk from these facilities.

Sandgate has two schools, the Sacred Heart Primary School and Sandgate State School, both of which are within walking distance of the railway station.

In 2009, the Sandgate Post Office was relocated to other premises and the heritage-listed building was sold. It was subsequently renovated and is now operating as the 4017 Bar & Grill (4017 being the postcode for Sandgate). Despite objection by some local members of the public, a McDonald's family restaurant opened opposite the 4017 Bar & Grill in 2014.

The Sandgate Golf Club is located in Allpass Parade, Shorncliffe.

A number of sports teams represent the local area, including the Sandgate-Redcliffe Gators and Sandgate Football Club.

In 2005 Surf Connect Watersports Centre opened at 170 Flinders Parade. Other than kayak rentals, they introduced the sport of kitesurfing, windsurfing as well as standup paddling to the area.

The Police and Citizens Youth Club (PCYC) is located next to playing fields at the western end of Kempster Street. It runs regular Blue Light Discos and other social events, and is a centre for gymnastics, martial arts training and other sports. Anytime Fitness Gym is located at 27 Brighton Road.

Operating out of the PCYC is the Shorncliffe Pottery Club which started in nearby Shorncliffe over 30 years ago, and after some years at Sandgate Town Hall relocated to the PCYC.

All content from Kiddle encyclopedia articles (including the article images and facts) can be freely used under Attribution-ShareAlike license, unless stated otherwise. Cite this article:
Sandgate, Queensland Facts for Kids. Kiddle Encyclopedia.