Shorncliffe is a suburb of Brisbane, Australia. It is situated northeast of Brisbane and is the neighbouring suburb of Sandgate. The suburb comes under the jurisdiction of the Brisbane City Council. At the 2011 Australian Census the suburb recorded a population of 1,914.

It is a small community with a village atmosphere. At times Shorncliffe has different festivals, including The Blue Water Festival whereby that start of the Brisbane to Gladstone yacht race begins from the opening of The Cabbage Tree Creek.

Aboriginals called the area Warra, meaning an expanse of water. 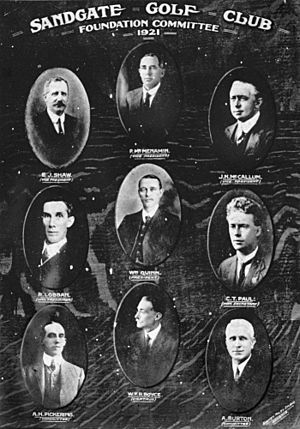 The Sandgate Golf Club commenced in 1921 with the official opening of its 9-hole course on 25 November 1922, having obtained a 21-year lease of the site from the Sandgate Town Council for a nominal rental as the Council believed that the golf course would be of lasting benefit.

In March 2012, the Shorncliffe pier was closed off to the public by the council due to fears of structural failure. It was rebuilt and reopened in April 2016.

Shorncliffe has a number of heritage-listed sites, including:

Shorncliffe includes one primary schools; Shorncliffe State School and one private boys school; St Patrick's College. Both these schools are situated on neighbouring blocks of land to each other.

Shorncliffe also includes one railway station, which is the terminus of the Shorncliffe railway line.

The Sandgate Golf Club is located in Allpass Parade.

The median age of the Shorncliffe population was 41 years, 4 years above the Australian median.

78% of people living in Shorncliffe were born in Australia, compared to the national average of 69.8%; the next most common countries of birth were England 5.6%, New Zealand 5%, Scotland 0.8%, United States of America 0.7%, Ireland 0.7%.

All content from Kiddle encyclopedia articles (including the article images and facts) can be freely used under Attribution-ShareAlike license, unless stated otherwise. Cite this article:
Shorncliffe, Queensland Facts for Kids. Kiddle Encyclopedia.