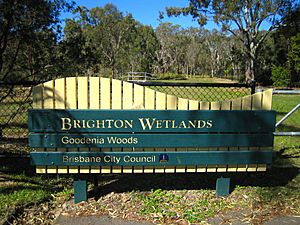 Brighton is a coastal northern suburb in the City of Brisbane, Queensland, Australia. In the 2016 census Brighton had a population of 9,479 people.

The median age of the Brighton population was 40 years of age, 3 years above the Australian median.

The main pub in Brighton is the Brighton Hotel located along Beaconsfield Terrace. An early settler, Captain William Townsend, bought the Brighton Hotel and used it as his home and, once sold in 1893, it was used as an orphanage. It resumed being a hotel in 1912.

Brighton has a wonderful woodland wetland protected by the local government. This natural reserve is made up of three woods; namely Goodenia Woods, Pimelea Woods and Dianella Woods. The land is so called a wetland as it fills with water during heavy rain which flows into a small tidal creek, Copold Creek, that flows under one of the main roads of Brighton, Beaconsfield Terrace, and then leads to Bramble Bay between 15th and 16th Avenues. 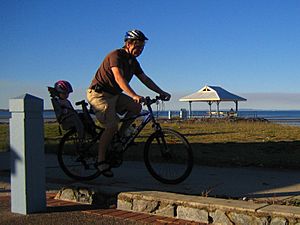 Brighton is a desirable Brisbane suburb due to both the ease of public transport, such as the train service from nearby Sandgate, and also the bayside esplanade. This peaceful parkland esplanade follows the coast between the Houghton Highway bridge and Sandgate. The esplanade is used by walkers, cyclists and families. Brighton's beach is used by kite surfers and also walkers during low tide. The road that follows the esplanade is called Flinders Parade named after the navigator Captain Matthew Flinders who was the first European to discover the area in order to establish a penal colony for Lord Brisbane, Governor of New South Wales.

All three bridges that have connected City of Brisbane to Redcliffe City commenced at their southern end at Brighton and at their northern end at Clontarf. The first bridgeHornibrook Bridge has been closed and is now mostly demolished save for the . Currently there are two bridges, Houghton Highway and Ted Smout Memorial Bridge. Government Traffic monitoring cameras enable a real-time view looking north from brighton to Clontarf. http://www.tmr.qld.gov.au/Traffic-cameras-by-location/Traffic-cameras.aspx?name=Brighton - Houghton Highway Bridge - Deagon Deviation (North-East)

Brighton has a number of heritage-listed sites, including:

Brighton is serviced by a fortnightly visit of the Brisbane City Council's mobile library service in the car park at Decker Park on 25th Avenue.

All content from Kiddle encyclopedia articles (including the article images and facts) can be freely used under Attribution-ShareAlike license, unless stated otherwise. Cite this article:
Brighton, Queensland Facts for Kids. Kiddle Encyclopedia.