Ashgrove is a suburb in the City of Brisbane, Queensland, Australia. In the 2016 census, Ashgrove had a population of 13,039 people.

Ashgrove's native name is 'Kallindarbin' and was originally inhabited by the indigenous 'Turrbal' or 'Duke of York clan'. The main thoroughfare, Waterworks Road, was built on a Turrbal pathway that led to Mount Coot-tha, a place of the 'Honey-Bee Dreaming' and to the Enoggera Reservoir. The first sales of freehold land commenced in 1856, and ceased in 1875 when all available land was sold. Soon after sale of land stopped, the first school (the Ashgrove State School) and post office was established. 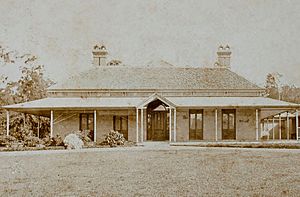 The area remained primarily a farming district until the end of the 19th century, when growth accelerated with the sale of land which housed one of the first homesteads in the area, the 'Granite House' in the area still known as St Johns Wood. In 1920, the tram line was extended from Red Hill, Queensland to Ashgrove, along Waterworks Road, connecting the suburb with the rest of Brisbane. The tram line closed on Monday 5 August 1968. 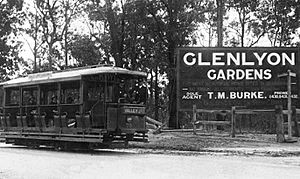 Tramdrivers and passengers in a Valley Junction tram at Ashgrove in 1923, on the corner of the Glenlyon Gardens housing estate.

Locality amalgamation into the suburb of Ashgrove

Dorrington (originally named the suburb of Oakleigh until 1946) and St Johns Wood were suburbs in their own right until they were absorbed into Ashgrove in 1975. To this day these locality names are still in common use, as many residents still associate their residence locations with these former names. 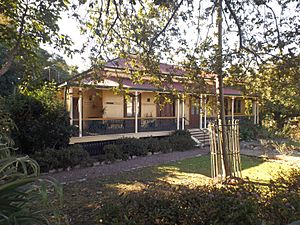 Ashgrove has a number of heritage-listed sites, including: 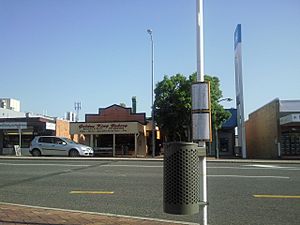 Ashgrove contains the neighbourhood of Ithaca, which is the home of the Broncos football club. The suburb contains a variety of multicultural restaurants (Thai, Indian, Italian, Japanese, Chinese, Modern Australian), numerous cafes, various shopping amenities (including Coles, Aldi and Woolworths supermarkets) and a public library.

Ashgrove is serviced by multiple council buses running along Stewart and Waterworks Roads into the central business district. Ashgrove is also a stop on the route of the cross-town Great Circle Line (598/599) which links the four major shopping malls of Brisbane.

Ashgrove contains two major bicycle shared paths via Ithaca and Enoggera Creeks which provide a pleasant, mostly flat, off-road and backstreets commuter route to the Royal Brisbane hospital and onwards to the City Centre via the inner northern bikeway. Much of the route winds through pleasant treed parklands.

The best known club in the area, GPS Rugby Football Club (known as 'Jeeps'), is one of the oldest established clubs in the area and plays at the Ashgrove Sports Ground, which dates back to 1887. The club has contributed 29 players to the Wallabies.

The ground also hosts the Valley District Cricket Club, which has provided both Queensland Sheffield Shield players and Australian players, including Matthew Hayden and Allan Border, and the Ashgrove Lawn Bowls Club. As well as this, there is a large Scouting group in St Johns Wood.

Ashgrove cricket club has had a long history as a club and in 2015 celebrated its 100th year. Ashgrove cricket club is part of Qld cricket and is part of the Qld sub district association. In the history of the club, home grounds have been at Gibson park Red Hill which is now the home of the Broncos Rugby League club. Other grounds included Dorrington park and The Gap high school was one of the most recent venues up until 2014. Now Ashgrove Cricket home ground is at Everton District AFL situated at Mott Street Enoggera. Players of average to very good are encouraged to participate in a friendly and competitive competition that runs every Saturday from the end of August through March with semi finals and grand finals to round out the competition. Flexibility of availability is a good option for players and can work around those who can play but not every week. Multiple grades cater for ability and availability.

The Ashgrove Rangers Athletics Club (The Rangers) is also another established club in the area. Formed in 1962, it has had over 3000 members, several of who have competed at State, National and International levels. It is celebrating its 60th year anniversary in 2022. The Rangers is one of the oldest Athletics clubs in Queensland and offers coaching and competition across all track and field events. The Club's Patron is the Member for Electoral district of Cooper and Vice Patron the Councillor for The Gap Ward. 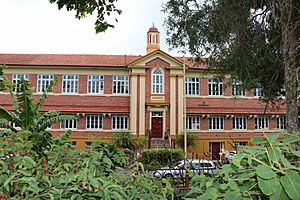 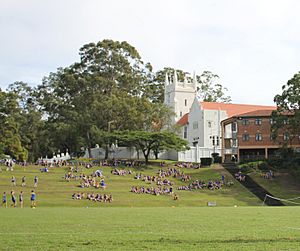 All content from Kiddle encyclopedia articles (including the article images and facts) can be freely used under Attribution-ShareAlike license, unless stated otherwise. Cite this article:
Ashgrove, Queensland Facts for Kids. Kiddle Encyclopedia.