Booval is a suburb of Ipswich in the City of Ipswich, Queensland, Australia. In the 2016 census Booval had a population of 2,622 people. 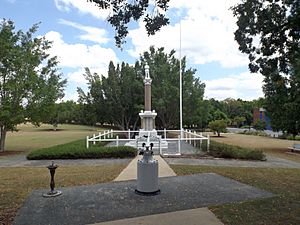 Booval has a number of heritage-listed sites, including:

The Booval Swifts rugby league football club bears the suburb's name. During the 1920s, two of Booval's players, Dan Dempsey and Arthur Henderson were selected to represent Australia. The club has also produced other such notable players as Des Morris and Kevin Walters.

All content from Kiddle encyclopedia articles (including the article images and facts) can be freely used under Attribution-ShareAlike license, unless stated otherwise. Cite this article:
Booval, Queensland Facts for Kids. Kiddle Encyclopedia.