Bundamba is a suburb of Ipswich in the City of Ipswich, Queensland, Australia. In the 2016 census Bundamba had a population of 6,514 people.

Bundamba stretches from the Bremer River to the north, across Brisbane Rd, the main arterial link to the Ipswich Motorway, to the Cunningham Highway in the south. The suburb consists of residential and industrial areas, with a variety of shops lining Brisbane Rd.

The origin of the suburb name is from the Yugarabul Aboriginal language meaning place of the stone axe. It was initially written as Bundumba, then Bundanba, and then on 30 January 1932, the name was officially standardised as Bundamba. 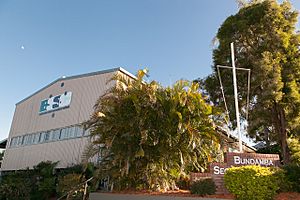 All content from Kiddle encyclopedia articles (including the article images and facts) can be freely used under Attribution-ShareAlike license, unless stated otherwise. Cite this article:
Bundamba, Queensland Facts for Kids. Kiddle Encyclopedia.