Blackstone is a suburb of the City of Ipswich, Queensland, Australia. At the 2011 Australian Census the suburb recorded a population of 1,017. 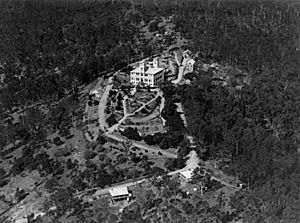 The district was originally called Bundamba Creek but this caused confusion with nearby Bundamba, so the postmistress Mrs Orr proposed the name Blackstone, believed to be a place in Ireland.

Blackstone has a number of heritage-listed sites, including:

All content from Kiddle encyclopedia articles (including the article images and facts) can be freely used under Attribution-ShareAlike license, unless stated otherwise. Cite this article:
Blackstone, Queensland Facts for Kids. Kiddle Encyclopedia.