The origin of the suburb name is from a village called Hope under Dinmore in Herefordshire, England.

Dinmore is situated in the crossroads area of, and is basically bordered by, the Ipswich Motorway, the Cunningham Highway, and the Warrego Highway. Brisbane Road, the main street leading to the nearby historical centre of Ipswich, runs through the middle of Dinmore. Many of the locals call Dinmore the gateway to the city, because it is at the entrance way to Ipswich. As well as being the entrance to Brisbane from the west. Brisbane road, in Dinmore, has a few shops and restaurants, with main shopping areas in nearby Booval and Redbank. Dinmore is only minutes from the city, but still has the feel of a rural suburb,with parks and green spaces throughout. 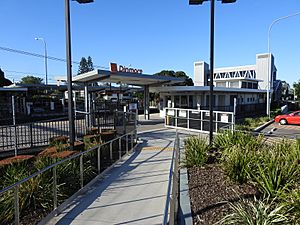 All content from Kiddle encyclopedia articles (including the article images and facts) can be freely used under Attribution-ShareAlike license, unless stated otherwise. Cite this article:
Dinmore, Queensland Facts for Kids. Kiddle Encyclopedia.