Ebbw Vale is a suburb of Ipswich, Queensland, Australia. The name Ebbw Vale is of old Welsh origin. Ebbw Vale is named after the town of Ebbw Vale in Wales. Its name in Welsh is Glyn Ebwy. The Cunningham Highway marks the eastern and southern boundaries of the suburb. At the 2011 Australian Census the suburb recorded a population of 526. 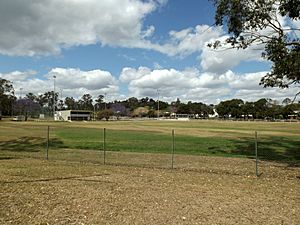 Ebbw Vale has a number of heritage-listed sites, including:

All content from Kiddle encyclopedia articles (including the article images and facts) can be freely used under Attribution-ShareAlike license, unless stated otherwise. Cite this article:
Ebbw Vale, Queensland Facts for Kids. Kiddle Encyclopedia.