Booval War Memorial is a heritage-listed memorial at Green Street, Booval, City of Ipswich, Queensland, Australia. It was built in 1919. It was added to the Queensland Heritage Register on 21 October 1992.

The Booval War Memorial was unveiled on the 15 February 1919 by Queensland Governor, Sir Hamilton Goold-Adams. The marble and granite memorial was produced by Ipswich monumental masonry firm, F Williams and Company and honours the 221 local men who served during the First World War. Later plaques honour the 16 who died in the Second World War Plaques commemorating later conflicts have also been added.

In 1918, a committee was established to represent the Ipswich suburbs of Booval, Silkstone, Newtown and Raceview. Funds were raised by entertainments and public subscription to erect a war memorial, of which the foundations were laid by a voluntary "working bee". On 27 July 1918, the foundation stone was laid by David Gledson, Member of the Queensland Legislative Assembly for Ipswich. The total cost was £499.

The land was originally in the private ownership of Harold Foote and later subdivided. In 1914 it was resumed by the Bundamba Shire Council for the purpose of a park reserve and after the amalgamation of Councils it came under the jurisdiction of the Ipswich City Council.

The Booval memorial was designed and executed by the well known and highly regarded Ipswich monumental masonry firm F Williams and Company. Frank William's reputation prompted Daphne Mayo to work as an apprentice to him to learn the art of carving. She did this while waiting to begin a travelling scholarship which had been postponed due to the outbreak of the First World War.

Daphne Mayo is one of Australia's best known sculptors, responsible for many significant works such as the pedimental relief on Brisbane City Hall, the friezes and capitals on the Brisbane Tattersalls Club and the bronze doors for the State Library of New South Wales. She was born in England in 1895 and came to Brisbane in her childhood.

The statue on the Booval War Memorial is attributed to Mayo as the memorial was constructed during this time and bears a strong resemblance to a model made by her. The statue is of a style repeatedly used by Williams. 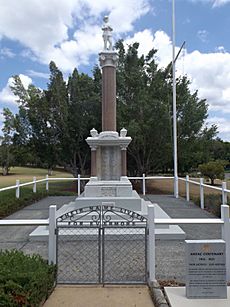 The First World War Memorial is situated in a park in Booval facing Green Street. The park is surrounded by a low fence consisting of white painted timber posts linked by a metal chain. Hill's Figs (Ficus microcarpa var. Hilli) line the boundary of the park. New landscaping is currently under construction and comprises a pathway and planting, symmetrically laid out with the memorial as the focal point. The original fence surrounding the memorial has been removed.

Access to the park is through a new timber pergola. This is flanked by two large fig trees which align with two more fig trees at the rear of the park. A new pathway leads from the centre of the pergola to the memorial with a gun or "war trophy" centrally located between the two. The pathway forms a square around the memorial and rejoins at the rear to continue to a rockery and seating. At the rockery, the path branches out diagonally, leading to an exit in one direction and a children's play area in the other. Newly planted trees line the pathway and a flagpole is located on the north side of the memorial.

The memorial stands 22 feet (6.7 m) from the ground and comprises a pedestal and column surmounted by a digger statue.

The granite and marble memorial sits on a stepped base of Melbourne bluestone which is painted. Surmounting the base is the pedestal, sitting on a marble plinth capped with torus and cyma recta moulding. The central portion of the pedestal is recessed on all faces and bears the leaded names of the 221 local citizens who served in the First World War and the 16 who died in the Second World War. Also projecting from the plinth at the four corners are free standing columns of red granite with Ionic order bases and capitals. These support a large cornice surmounted by marble urns at each corner with a simple curved pediment between.

Above the cornice is a column of red granite with an Ionic capital of marble. This is surmounted by a marble digger statue, smaller than life-sized standing at ease with arms reversed and supported by a tree stump. He stands with his feet slightly apart and the rifle rests beside one foot and is held across his body.

Booval War Memorial was listed on the Queensland Heritage Register on 21 October 1992 having satisfied the following criteria.

Unveiled in 1919, the memorial at Booval demonstrates the principal characteristics of a commemorative structure erected as an enduring record of a major historical event. This is achieved through the use of appropriate materials and design elements. As a digger statue it is representative of the most popular form of memorial in Queensland

The memorial is of aesthetic significance both as a landmark and for its high level of workmanship, design and materials.

It has a strong association with the community as evidence of the impact of a major historic event.

All content from Kiddle encyclopedia articles (including the article images and facts) can be freely used under Attribution-ShareAlike license, unless stated otherwise. Cite this article:
Booval War Memorial Facts for Kids. Kiddle Encyclopedia.