East Ipswich is a residential inner-city suburb of Ipswich, Queensland, Australia. One of the older suburbs, East Ipswich is predominantly made up of weatherboard and fibro houses punctuated with larger heritage houses, and newer townhouses and flats.

The suburb is bordered on the north and west by two sections of the Bremer River (split by the small suburb of Basin Pocket); and to the south by Brisbane Road, the city's main arterial link to the Ipswich Motorway. 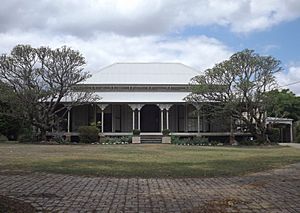 The Kyeewa residence dates from around 1890.

East Ipswich has a number of heritage-listed sites, including:

All content from Kiddle encyclopedia articles (including the article images and facts) can be freely used under Attribution-ShareAlike license, unless stated otherwise. Cite this article:
East Ipswich, Queensland Facts for Kids. Kiddle Encyclopedia.