North Ipswich is a suburb of Ipswich, Queensland, Australia. At the 2011 census the suburb recorded a population of 4,587.

The southern boundary of the suburb follows the Bremer River. The Warrego Highway passes from east to west across the northern part of the suburb. Raymonds Hill is a locality within the suburb of North Ipswich.

North Ipswich is the birthplace of Queensland Rail. The original site is now the site of Riverlink shopping centre on The Terrace and the current site is used as a joint facility containing the Workshops Rail Museum.

The suburb contains a large number of character and heritage listed houses, such as workers cottages that were home to the many railway workers. 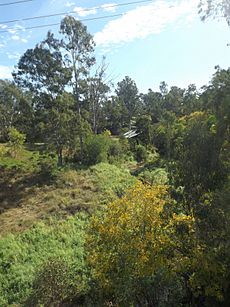 North Ipswich has a number of heritage-listed sites, including:

All content from Kiddle encyclopedia articles (including the article images and facts) can be freely used under Attribution-ShareAlike license, unless stated otherwise. Cite this article:
North Ipswich, Queensland Facts for Kids. Kiddle Encyclopedia.