Brassall is a suburb of Ipswich, Queensland, Australia. In the 2011 census, Brassall had a population of 9,245 people.

Brassall has a southern boundary partially marked by the Bremer River and a western alignment along Ironpot Creek. The northern boundary follows the Warrego Highway. Brassall now incorporates part of the old suburb of Raymonds Hill. 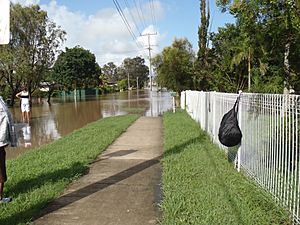 The suburb name first appears on a plan drawn by surveyor James Warner on 6 October 1851; however, the origin of the suburb name is unknown. It was also known as Hungry Flats, as was a stop over for bullock teams that were transporting logs from Pine Mountain to Hancocks saw mill at North Ipswich. Brassall was a separate shire (Shire of Brassall) with its own council from March 1860 until 1 January 1917 when the area became part of Ipswich. The suburb was officially bounded and named in 1991. The Brisbane Valley railway line once passed through Brassall. 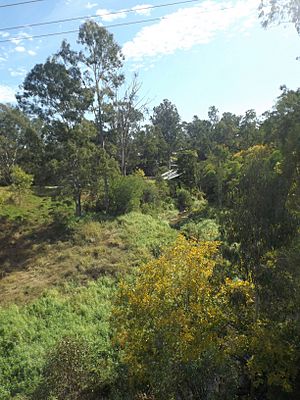 Brassall has a number of heritage-listed sites, including

At the 2011 Australian Census the suburb recorded a population of 9,245. Brassall is an area of Ipswich which has a higher demographic. As reported in the Australian Bureau of Statistics, Brassall's occupants hold higher levels of education than those from other suburbs. Brassall's occupants vary from retirees, young families and defence personnel.

All content from Kiddle encyclopedia articles (including the article images and facts) can be freely used under Attribution-ShareAlike license, unless stated otherwise. Cite this article:
Brassall, Queensland Facts for Kids. Kiddle Encyclopedia.