Pine Mountain is a semi-rural locality of City of Ipswich, Queensland, Australia. Pine Mountain is located in the Lockyer Valley. This area consists mostly of rural properties and acreages with historical farmhouses and buildings. 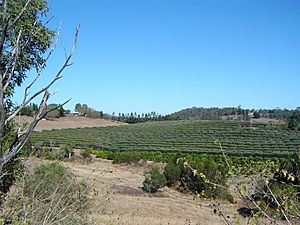 The eponymous mountain rises to a height of 233 metres above sea level and is located in the middle of the area. The area is bounded on the northeast by the Brisbane River and on the south by the Warrego Highway. The locality of Muirlea is considered part of the suburb of Pine Mountain. Araucaria cunninghamii, also known as the hoop pine is very common in the area.

The original inhabitants of the Pine Mountain area were the Ugarapul Aboriginal people. In 1824, the explorers Oxley and Cunningham mentioned meeting an elderly Aboriginal man who had been fishing with a spear near Upper Blackwall. Cunningham described his friendliness and his "open frankness of countenance" as he provided them with information regarding convenient places to cross the river and travelled with them to the foot of Pine Mountain.

By the 1850s, loggers had moved into the area due to abundant timber provided by the hoop pine. Some logs were transported to Ipswich using bullock teams, while others were transported down the Brisbane River.

After tracts of land were cleared farming commenced, with the early settlers producing lucerne, maize and cotton. Orchards were started and dairying became important. A small butter factory, a school and several churches were established. Of these only the Catholic Church remains.

The Brisbane Valley railway line was established in 1884, connecting Ipswich to Lowood and passing through Pine Mountain. This line still exists but is disused.

All content from Kiddle encyclopedia articles (including the article images and facts) can be freely used under Attribution-ShareAlike license, unless stated otherwise. Cite this article:
Pine Mountain, Queensland Facts for Kids. Kiddle Encyclopedia.