Wulkuraka is a suburb of Ipswich, Queensland, Australia. At the 2011 Australian Census the suburb recorded a population of 855.

The origin of the suburb name is from an Aboriginal word meaning either red flowering gum tree or plenty of kookaburras.

The Brisbane Valley railway line once joined the Main Line from the north at Wulkuraka. 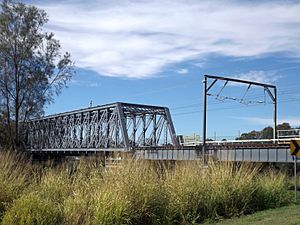 Wulkuraka has a number of heritage-listed sites, including:

Wulkuraka Railway Station provides Queensland Rail City network services to Rosewood, Ipswich and Brisbane via Ipswich. A purpose built workshop has been constructed to the west of the railway station, exclusively for the New Generation Rollingstock. 75 of these new trains will be serviced and maintained there under the Qtectic consortium.

Wulkuraka is located approximately 1 hours drive to Brisbane. It is located near Royal Australian Air Force Base, Amberley. It is in close vicinity of shops and services, however is undeveloped and located on the outer suburbs of Ipswich. Wulkuraka is a peaceful suburb with large bushland topography.

All content from Kiddle encyclopedia articles (including the article images and facts) can be freely used under Attribution-ShareAlike license, unless stated otherwise. Cite this article:
Wulkuraka, Queensland Facts for Kids. Kiddle Encyclopedia.