Tivoli is a suburb in the City of Ipswich, Queensland, Australia. In the 2016 census, Tivoli had a population of 1,487 people.

Tivoli is home to one of six remaining drive-in cinemas in Queensland.

Until recently Tivoli and Tivoli Hill were separate suburbs, but both are now known as Tivoli, with Tivoli Hill a locality. Situated north of the Bremer River, Tivoli is four km north-east of central Ipswich and north-east of the Ipswich railway workshops. The northern boundary of Tivoli is marked by the Warrego Highway.

The Tivoli area had been subdivided and sold as farmland in 1861-63, and the observant purchasers went in for coal mining. Houses and communities formed around the irregular subdivisions and mining areas. A congregational church was opened in 1875 and the primary school in Mount Crosby Road was opened six years later. The church hall was used as a school room for children and adults (night classes), and had over 100 pupils by 1877. The church hall, in Church Street, has had continuous use.

Whilst many houses were built for workmen, mine owners built close to their work sites. Next to the school in Mount Crosby Road the family of John Wright, proprietor of the Eclipse mine, built three houses on large allotments. The grandest, 'Oaklands' is the central one; all have spacious gardens and are listed on the Queensland heritage register.

On the other side of Mount Crosby Road, the Abermain Colliery (1880s) was a large operation with a spur line from the Tivoli railway and several coke ovens. After lying idle for several years the site was used for sewerage treatment. It adjoins a sports complex and the Ipswich Caravan Village. A short distance south there is the Abermain electricity substation which was enlarged in 2009.

In another direction, a tramway was opened from the Tivoli mines to the pumping station at the Mount Crosby weir, transporting coal from 1913 until about 1932. Financed and named by John Robinson (Ipswich soda-water manufacturer) and Harry Hooper, it seems that Tivoli was a Hooper family name. 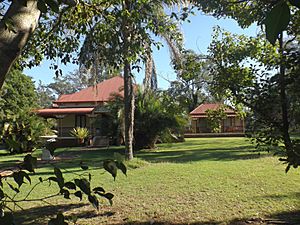 98 Mt Crosby Road is part of the Wright Family Houses

Tivoli has a number of heritage-listed sites, including:

All content from Kiddle encyclopedia articles (including the article images and facts) can be freely used under Attribution-ShareAlike license, unless stated otherwise. Cite this article:
Tivoli, Queensland Facts for Kids. Kiddle Encyclopedia.