Nudgee is a north-eastern suburb in the City of Brisbane, Queensland, Australia. In the 2016 census, Nudgee had a population of 3,578 people. 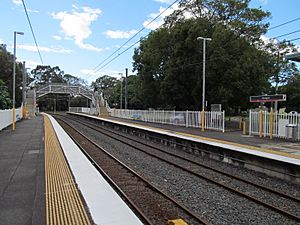 Nudgee will be amongst the first suburbs in the Brisbane Area to be connected to the National Broadband Network, with services predicted to be available in November 2013. Nudgee's upcoming fibre network will be serviced by the 4NDG fibre serving area.

Nudgee cemetery is located on St Vincents Road and is operated by the Roman Catholic Archdiocese of Brisbane. It is the largest private cemetery in Brisbane. Although most people buried there are Catholics, non-Catholics can also be buried there.

There are no schools within the suburb. Earnshaw State College is both the nearest primary and secondary school in neighbouring Banyo.

All content from Kiddle encyclopedia articles (including the article images and facts) can be freely used under Attribution-ShareAlike license, unless stated otherwise. Cite this article:
Nudgee, Queensland Facts for Kids. Kiddle Encyclopedia.