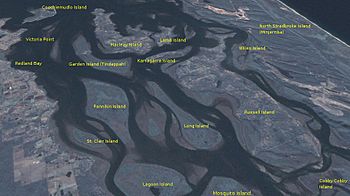 Russell Island is an island, a town and a locality in the City of Redland, Queensland, Australia. In the 2016 census, Russell Island had a population of 2,836 people.

Russell Island in Redland City is the biggest of the Southern Moreton Bay Islands, situated between the mainland and North Stradbroke Island. The island is eight kilometres long (north-to-south) and nearly three kilometres wide. The channel separating it from the mainland is known as Main Channel and the channel separating it from North Stradbroke Island is known as Canaipa Passage.

A basic survey of the island was conducted by Robert Dixon in 1839. He named the island after Lord John Russell the Secretary of State for the Colonies in the 1840s.

The island was first settled by Europeans in 1866, when John Campbell was granted a lease on the northern end of the island closely followed by John Willes and his family. Land auctions commenced in 1870. Farmers and oystermen were the first full-time inhabitants, but with the arrival of the Jackson family in 1906, a small village was created on the western side of the island called Jacksonville, that had a sawmill, pineapple canning factory, jetty and even a picture theatre.

Russell Island is known for the infamous land scams of the early 1970s, when many of the islands farms were divided into over 20,000 blocks. At the time, the area, with a population of less than 500, did not have a local authority enforcing planning regulations. Heavily advertised and sold off by unscrupulous vendors, these blocks were often not where the unwary customers thought they were buying. It all rode on the vague promise of a bridge from the National Party government at the time. Media reports exposing the scam pointed to blocks that were underwater at high tide and the lack of public land.

On 12 April 2008, a public 25 metre swimming pool jointly funded by the Redland City Council, the Queensland State Government, a rates levy and nearly 20 years of donations from residents was completed. Management has been contracted to the YMCA. The first bathers hit the water during that weekend but, lacking any heating, it was closed for the winter. Sufficient solar heating for spring and autumn use was installed in 2009.

Russell Island has a number of heritage-listed sites, including: 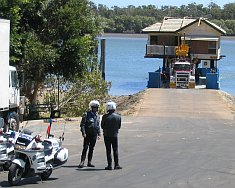 Russell had 1,779 permanent residents in 2006 up 35.9% since 2001. However, this changes dramatically on weekends and holidays when many of the 30% of dwellings on the island which are classified as unoccupied are visited by their owners. Fast ferries and scheduled barges straddle the distance to Redland Bay quickly for most of the day.

The median age of the Russell Island population was 51 years, 14 years above the national median of 37.

The two licensed clubs, an RSL and the Russell Island Bowling Club, provide entertainment and bistro facilities most nights of the week.

The Redland Library service operates the Russell Island Public Library which is located at 22 High Street.

A Council-built hall near the main wharf is available and, centrally located on Jackson Street, the Bay Islands Community Centre has rooms. Some church denominations meet at the hall but others use the historic St Peter's Church Hall just up High Street. In 2009 the Kennedy Farm Community Centre was revamped with Commonwealth money and is now available for small scale community activity. Resident driven plans for the 4.5 ha block include sporting facilities and a community farm.

Electricians, builders and plumbers are resident on the Island, making the island somewhat self-supporting. Services include power, phone, broadband, water and garbage collection. Garbage is trucked to the mainland for disposal. The Rural Fire Brigade, State Emergency Service and the Ambulance service receive strong volunteer support. Several volunteer Justices of the Peace live on the island. A small primary school for around 180 students has an active Parents and Citizens club. In early 2010 the Bay Islands Community Centre with grants from Community Service and the Council, opened a youth drop-in centre on Jackson Road.

In 2015 the Russell Island residents groups, together with the Redland City Council, have proposed to transition the island's name to its traditional Aboriginal equivalent – Canaipa Island. The proposal is that the dual names of Canaipa Island/Russell Island will be used with the island's name reverting to its traditional name once it becomes more widely accepted. The name Canaipa was collected from Yugambeh people and identified as a Yugambeh-Bundjalung language word from the Ngaraangbal dialect spoken by the Pimpama clan meaning place of ironbark spear/digging stick, the name is used by both the Quandamooka and Yugambeh people, who assert traditional ownership. The move is motivated by the desire to improve public perceptions (and hence real estate values) which were damaged by the earlier land scams.

All content from Kiddle encyclopedia articles (including the article images and facts) can be freely used under Attribution-ShareAlike license, unless stated otherwise. Cite this article:
Russell Island (Moreton Bay) Facts for Kids. Kiddle Encyclopedia.