Oxley is a south-western suburb in the City of Brisbane, Queensland, Australia. In the 2016 census, Oxley had a population of 8,336 people. 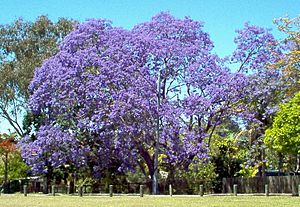 Oxley is bounded to the north by the Brisbane River and Oxley Creek flows along the eastern edge. In the east the environment is shaped by flood plains which experience major flooding and flash-flooding. Western parts of the suburb are characterised by rolling hills with clay-laden soils. 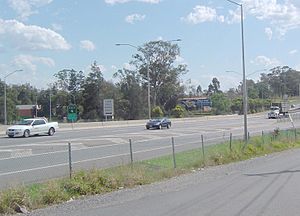 The suburb is traversed by the Ipswich Motorway connecting Oxley to Rocklea to the east and Darra to the west. Oxley Road connects Oxley to Corinda to the north and continues south across the Ipswich Motorway with the name Blunder Road to Durack,Seventeen Mile Rocks Road connects Oxley to the west to Seventeen Mile Rocks and Darra. Oxley is separated from Fig Tree Pocket by the Brisbane River. Oxley resides in the same postal code area as Corinda, Sherwood and Graceville. 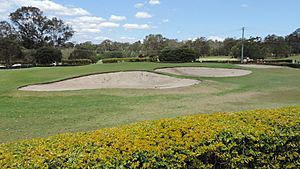 Oxley has two golf courses and a golf driving range—Oxley Golf Course located on Boundary Road, and Corinda Golf Course located on Cliveden Avenue, the latter of which has now been purchased by Brisbane Boys' College as their playing fields along with the driving range. Oxley also contains a lawn bowls club, the Canossa Private Hospital, the Queensland Police Service's training academy, two highway motels, a war memorial, post office, mosque and a few churches.

Stores include an Aldi supermarket, a smaller Foodworks grocery store and a McDonald's restaurant. Retailers with outlets in Oxley include Harvey Norman, Bunnings Warehouse, Officeworks, Super A-mart, The Good Guys and there is a 1st Choice liquor store. The suburb has two petrol service stations and a few landscaping material suppliers in the western parts. With an easily accessed supply of clay in the area PGH Bricks & Pavers has one of two Queensland production plants located here. On 17 July 2013, a new Woolworths store opened on Oxley Station Road. The Station Oxley Shopping Centre is located at 133 Station Road also contains approximately 15 speciality retail stores and the Department of Disability Services Queensland on the upper level.

The former Austral Bricks quarry site in Douglas Street, as well as two other plots of vacant land in the area have been converted to residential estates, providing significant housing to a region and growing city, where strong demand is not being met by supply. The quarry was originally owned by Brittain Bricks. For many years the site was a brickworks, sourcing clay directly from adjacent pits. After production stopped, the kiln stack remained intact. During the mid-1990s the tall structure was removed as it was attracting lighting strikes.

The first land sale that covered parts of today's Oxley occurred in 1851. Oxley once covered a larger area including the suburbs of Chelmer, Graceville and Corinda to the north. It extended to the south into the current suburbs of Willawong and Durack. The first subdivision of residential lands occurred in 1864 near Douglas Street. Although the railway through the suburb connected Oxley to the rest of Brisbane it was the road to Ipswich that defined the suburb's early development.

The suburb was a stop-over point on the Cobb & Co coach route west to the Darling Downs. The first hotel in Oxley was built in 1860 close to Oxley Creek on a rise near Factory Road. It attracted other businesses to the area and provided refreshments for travellers between Brisbane and Ipswich. The hotel soon gained a reputation as a venue where drinking and dancing occurred well into the morning hours. The hotel was moved several times due to flooding which was not a deterrent to the licensee. By 1892 a brick hotel has been built on the corner of Oxley Road and Ipswich Road, the site of a public bar still open today.

In 1870 the first school in Oxley was opened. A small creamery was operating in 1873, most probably located near Factory Road in Oxley's south east parts. The railway station was opened in 1874. This led to the establishment of a second subdivision in 1876, referred to as the Township of Oxley which was centred on the train station. It consisted of 140 allotments with the lower ones experiencing periodic inundation. In the same year the construction of the first police station was completed. Dairying became common in the area during the 1890s. The 1893 Brisbane flood halted housing construction in the lower parts of Oxley for many years. William Brittain moved his brick making operations to a 200-acre (0.81 km2) site on Douglas Street in 1899. 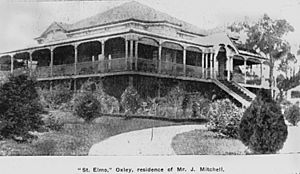 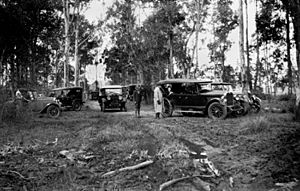 By 1904 the "Bacon Factory" as it was locally known as, which produced not only bacon but also cheese, ham and other small goods was established. Because of regular flooding the Oxley police station was moved in 1911, to a site where the police academy currently is. The Oxley Progress Association was founded in 1917. It built the small hall in Station Road and supported the establishment of the Oxley War Memorial. This community group was still active in the early 1990s. During this time the Darra cement works on the western edge of Oxley had plans for a major expansion. With the help of the Oxley Progress Association residents were successful in stopping this development. In the 1960s the group played a major role in the proclamation of Queensland's Clean Air Act. 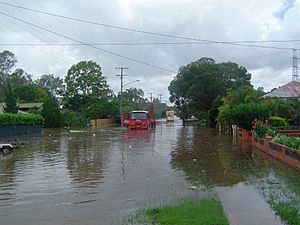 In 2003, Oxley was one of a number of suburbs that benefited from the Suburban Community Improvement Programme. Landscaping and tree planting around Oxley Station and the beautification of the nearby roundabout and footpaths were some of the activities undertaken by the Brisbane City Council to improve the area's appearance. A second tavern on Blunder Road was opened in 2003.

The 2010–2011 Queensland floods inundated many properties along the main roads of Oxley Road, Blunder Road and the Ipswich Motorway as well as at least ten minor roads. 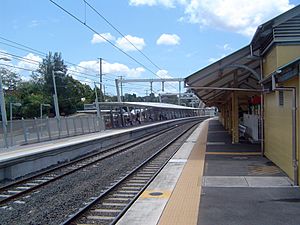 The Ipswich Motorway traverses Oxley and the train from Brisbane to Ipswich has a station at Oxley, and is connected to a number of suburbs via bus services. A CityExpress bus stop on Blunder Road links Inala Plaza bus station to the inner city using Ipswich Road. Oxley Road connects the Ipswich Motorway to the suburb of Indooroopilly via the Walter Taylor Bridge. 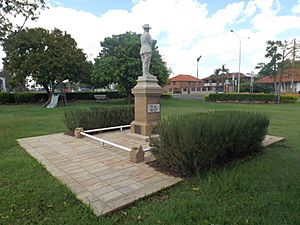 Oxley has a number of heritage-listed sites, including:

With an easily accessed supply of clay in the area, PGH Bricks & Pavers has one of two Queensland production plants located in Oxley.

All content from Kiddle encyclopedia articles (including the article images and facts) can be freely used under Attribution-ShareAlike license, unless stated otherwise. Cite this article:
Oxley, Queensland Facts for Kids. Kiddle Encyclopedia.