Chelmer is a south-western suburb in the City of Brisbane, Queensland, Australia. In the 2016 census Chelmer had a population of 2,998 people.

Chelmer is located on a bend of the Brisbane River, with all sides except south bounded by the river.

Laurel Avenue is considered one of the most prestigious addresses in Brisbane by some, for the reason that large portions of the avenue are overhung by large camphor laurel (Cinnamomum camphora) trees (some over a hundred years old). The Camphor Laurel trees have been declared a noxious weed by the Brisbane City Council, as their roots actively seek underground sewage pipes. 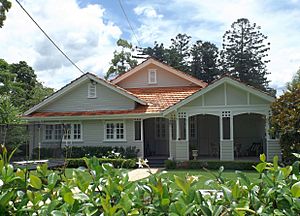 Chelmer has a number of heritage-listed sites, including:

Chelmer is divided into east and west by Queensland Rail City network's Ipswich and Rosewood railway line and the Chelmer railway station. The Albert Bridge and the Indooroopilly Railway Bridge join the railway to Indooroopilly. A pedestrian/bicycle bridge, alongside the road and rail bridges, also links Chelmer (on the Southern bank of the Brisbane River) to Indooroopilly.

All content from Kiddle encyclopedia articles (including the article images and facts) can be freely used under Attribution-ShareAlike license, unless stated otherwise. Cite this article:
Chelmer, Queensland Facts for Kids. Kiddle Encyclopedia.