Darra is a suburb in the City of Brisbane, Queensland, Australia. In the 2016 census, Darra had a population of 4,343 people.

In 1954, the Darra RSL Memorial Hall was opened. Sumner was known as Darra until 1969 when it became a separate suburb. Vietnamese refugees began to settle in the area in 1975. The origin of the word Darra came from the Aboriginal word for 'stones'. 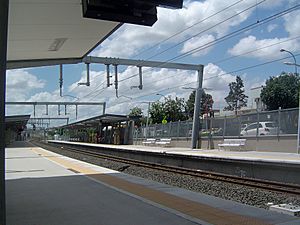 Darra railway station provides access to regular Queensland Rail City network services to Brisbane CBD, Ipswich, Rosewood and Springfield. When the railway was completed in 1876 "with a stop at nine mile eighty four chain gate", halfway between the planned Oxley railway station and Wacol railway station, the site was set for the future Darra. The station was once the terminus for the first of Brisbane's electric rail lines, linked to Ferny Grove railway station in 1979.

Overall plans include the further redevelopment of the industrial park, which should provide an injection of capital into the community and further upgrade local infrastructure and community facilities. The Brisbane City Council has been active in rejuvenating the streetscapes of the Darra suburb as well as neighbouring recreational and parkland facilities in Jindalee and Sinnamon Park.

All content from Kiddle encyclopedia articles (including the article images and facts) can be freely used under Attribution-ShareAlike license, unless stated otherwise. Cite this article:
Darra, Queensland Facts for Kids. Kiddle Encyclopedia.